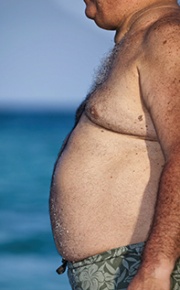 Cancer risk and body weight – how the evidence stacks up

By Jane Lewis
A special report published in the New England Journal of Medicine has concluded that the absence of excess body fat lowers the risk of most cancers. Animal studies and mechanistic data also ‘suggest a causal cancer­-preventive effect of intentional weight loss,’ although sufficient evidence in humans remains to be established.

Commenting to Medicine Today, Associate Professor Tania Markovic, Director of Metabolism and Obesity Services at Royal Prince Alfred Hospital in Sydney, said the report represents ‘more bad news’ for people carrying excess weight. ‘We’ve known there is a link between obesity and several types of cancer, and this report now adds even more cancers to that list,’ she said.

The report was authored by the International Agency for Research on Cancer (IARC), which convened a working group early in 2016 to reassess the preventive effects of weight control on cancer risk, following a similar exercise back in 2002. At that time, the previous IARC working group concluded there was sufficient evidence for ‘a cancer­-preventive effect of avoidance of weight gain for cancers of the colon, esophagus (adenocarcinoma), kidney (renal­-cell), breast (postmenopausal), and corpus uteri.’

The current review not only reaffirmed that the absence of excess body fatness lowers the risk of these five cancers, but also identified another eight cancers for which there is now also sufficient evidence of reduced cancer risk, including those of the gastric cardia, liver, gallbladder, pancreas, ovary and thyroid, as well as multiple myeloma and meningioma.

Significant associations between body mass index (BMI) and cancer risk, and positive dose–response relations, were reported for several cancers. Cancer risks associated with excess weight were similar for men and women, and appeared to be consistent across geogra­phic regions.

There was strong evidence of an association between increased BMI near the time of cancer diagnosis and reduced survival in patients with breast cancer, but not for other cancers. Although some data suggested intentional weight loss could reduce cancer risk, particularly for breast and endometrial cancers, the number and quality of these studies were judged to be insufficient.

‘Clinicians need to keep in mind that obese people are at increased risk of many cancers, and this makes screening – where possible – particularly important in these patients,’ commented Associate Professor Markovic. It is also ‘yet another reason’ to try to help such patients lose weight, or avoid weight gain, she added.
N Engl J Med 2016; 375: 794-798. doi: 10.1056/ NEJMsr1606602.