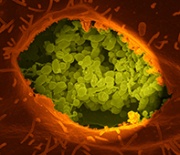 By Melanie Hinze
New Australian research has found past exposure to Coxiella burnetii – the causative organism of Q fever – to be higher than expected in rural residents, even in those who are not currently recommended for Q fever vaccination.

The study, published in the Medical Journal of Australia, found the seroprevalence of C. burnetii antibody was 2.5 times higher in people whose only identified risk factor was living in a rural area for more than three months, when compared with people who had never lived rurally.

Lead author of the study, Associate Professor Heather Gidding, from The University of Sydney and the National Centre for Immunisation Research and Surveillance, said the research showed Q fever rates to be higher than expected in rural areas, even in people who had no regular contact with sheep, cattle or goats.

‘What this means for GPs is that they need to be aware that some of their rural patients might have Q fever and consider it as a differential diagnosis, even in people without the classic high­-risk factors,’ she said.

As expected, seroprevalence was higher in nonmetropolitan than metropolitan regions, at 3.7% in Hunter New England and 4.9% in Toowoomba compared with 2.8% in Sydney and 1.6% in Brisbane. Donors were more likely to be seropositive if they had regular contact with sheep, cattle or goats; undertook abattoir work; or assisted at an animal birth.

The researchers also found that in groups recommended for vaccination only 40% were aware of the Q fever vaccine and only one in 10 had been vaccinated.

Associate Professor Gidding said the research made it clear that Q fever was both under­-recognised and under-vaccinated. She recommended that health professionals caring for rural patients be familiar with the symptoms of Q fever and its diagnosis and have conversations with patients about their need for vaccination.
Med J Aust 2019; doi: 10.5694/mja2.13004.