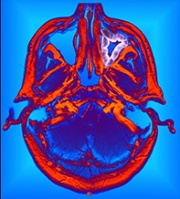 By Bianca Nogrady
Depression is a common problem in individuals with chronic rhinosinusitis but treating the depression can also improve their sinusitis symptoms, new research suggests.

A prospective, US multicentre study in 685 patients with chronic refractory rhinosinusitis found that just under one-quarter of these patients (24.4%) also had depression on a two-item patient health questionnaire.

According to the findings, which were published in JAMA Otolaryngology – Head & Neck Surgery, patients with depression had worse sinus-specific quality of life scores, had poorer sleep quality, missed nearly four times as many days of work, and used more pharmacotherapy than patients without depression. However, medical or surgical treatment not only resulted in significant improvements in sinus-related outcomes, antibiotic use and productivity, but was also associated with significant improvements in the incidence of depression and depression scores.

‘It is unclear whether independent treatment of comorbid depression in conjunction with continued medical therapy or surgery would result in even greater improvement, and the economic effect of improving CRS-associated depression with subsequent improvements in productivity and medication use remains to be determined,’ the researchers wrote.

Commenting on the findings, Professor Richard Harvey said the study highlighted the fact that patients with depression can still achieve significant improvements with treatment for their rhinosinusitis.

‘There is a general feeling that you’re going to have a worse outcome with a depressed patient,’ said Professor Harvey, Program Head and Director of Rhinology and Skull Base Surgery at UNSW and Macquarie University, Sydney.

‘While depressed patients will not necessarily achieve the same quality of life expectations, it doesn’t hold them back from having improvement,’ he told Medicine Today.

Professor Harvey also said the identification of depression in patients with chronic upper airways disease provided an opportunity for addressing the underlying depression as well as the sinusitis.

‘When doctors think of sending someone on for referral for managing sinus disease, they should be aware if patients have depression related to that condition as well.’
JAMA Otolaryngol Head Neck Surg 2016; doi: 10.1001/jamaoto.2015.3810.