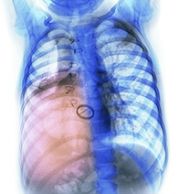 The replacement of the 7-valent pneumococcal conjugate vaccine (7vPCV) with 13vPCV on the NIP in July 2011 extended cover to six additional Streptococcus pneumoniae serotypes (ST): 1, 3, 5, 6A, 7F and 19A.

In this study, published in Thorax, researchers compared the incidence rates of national hospitalisations for childhood empyema and childhood pneumonia from June 2007 to May 2011 (7vPCV period) and June 2012 to May 2017 (13vPCV period). They also examined blood and pleural fluid cultures and pleural fluid polymerase chain reaction testing from 401 children hospitalised with empyema during the 13vPCV period and compared these with findings from a previous study undertaken in the 7vPCV period.

Study coauthor, Professor Peter McIntyre, Infectious Diseases Paediatrician, Public Health Physician and Epidemiologist from the University of Otago, New Zealand, said empyema ‘is the most clinically severe manifestation of pneumonia, which, although it only accounts for 1 to 2% of cases, can be associated with ICU [admission] or death.’

The researchers suggested possible explanations for the observed increase in empyema hospitalisations could include an increased prevalence of ST3, which had a predilection for infection of the pleural space, and suboptimal protection of 13vPCV against ST3.

‘The only country using ST3 which has found any significant effectiveness against ST3 is [the] US, which is also one of very few countries still using a “3+1” schedule. Whether this finding is due to that extra dose or other factors is unclear,’ Professor McIntyre said. ‘However, this could be taken as a timely reminder to ensure that Aboriginal and Torres Strait Islander children in the NT, Qld, SA and WA continue to receive the “3+1” schedule, as well as children with higher susceptibility to invasive pneumococcal disease due to other medical conditions.’
Thorax 2021; 0: 1-7; doi:10.1136/thoraxjnl-2020-216032.