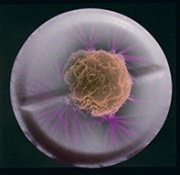 By Melanie Hinze
Despite new research finding that past use of some meno­pausal hormone therapies (MHTs) is not associated with increased breast cancer risk, an Australian expert told Medicine Today that this is not consistent with worldwide literature.

The research, published inThe BMJ, used two nested case­-control studies of 98,611 women aged 50 to 79 years with a primary diagnosis of breast cancer between 1998 and 2018. The women were matched by age, general practice and index date to 457,498 female controls. Data were obtained from UK general practices contributing to QResearch or Clinical Practice Research Datalink (CPRD).

Professor Emily Banks, Professor of Epidemiology and Public Health Research at the School of Population Health, The Australian National University in Canberra, said, ‘Women and their health professionals need to have their care guided by the sum total of the worldwide evidence in the area’.

‘For MHT and breast cancer this is from the Collaborative Group on Hormonal Factors in Breast Cancer, published in the Lancet in 2019, which included over 100,000 postmenopausal women with breast cancer from many millions of participants.’

A key finding of the Lancet meta­-analysis was that some elevated breast cancer risk continued for more than 10 years after MHT cessation, especially if use was longer than one year.

‘Unsurprisingly, The BMJ analyses confirm the established increase in breast cancer risk with MHT use,’ Professor Banks said. ‘However, because this is a single paper and has significant methodological issues, it provides less accurate and reliable findings than the meta-­analysis,’ she added.

‘As such, health professionals, including GPs, should continue to be guided by the sum total of the worldwide evidence, currently from the Collaborative Group. For clinicians, this means following current guidance that MHT should be used for as short a time as possible in women with moderate to severe symptoms, who have been fully informed of the risks.’
BMJ 2020; 371: m3873; http://dx.doi.org/10.1136/bmj.m3873.