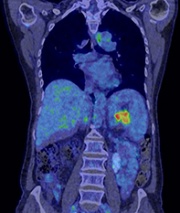 By Melanie Hinze
Recent-­onset diabetes, accompanied by weight loss rather than weight gain, is associated with a substantially increased risk of developing pancreatic cancer, according to research published in JAMA Oncology.

Conjoint Clinical Professor David Goldstein, a senior staff specialist in the Department of Medical Oncology at Prince of Wales Hospital, Sydney, said that this was a highly significant and large population study.

‘It reinforces the increasing evidence that recent onset of hyperglycaemia and type 2 diabetes with weight loss, as opposed to the more typical weight gain, should alert community GPs and endocrinologists to the possibility of an underlying pancreatic malignancy,’ he told Medicine Today.

Participants were enrolled from the US Nurses’ Health Study, which began in 1976, and the Health Professionals Follow­Up Study, initiated in 1986. Follow-up occurred in 2018.

Risk was further increased among those with older age, healthy weight before weight loss and unintentional weight loss.

‘A relative risk rate of six-­ to 10-­fold translates into a 2 to 4% risk of being diagnosed in the subsequent four years,’ said Professor Goldstein.

The study authors noted the high mortality rate of pancreatic cancer, with patients often presenting with advanced, incurable disease, and said patients diagnosed early had the potential to be cured.

However, Professor Goldstein said that although it was a very reasonable hope that this might represent an opportunity to investigate and diagnose pancreatic cancer at an early enough stage to intervene and improve outcomes, this remained to be proven. He added this was also the case for the cost-effectiveness of investigations, on a number needed to investigate per life year saved.
JAMA Oncol 2020; doi:10.1001/jamaoncol.2020.2948.