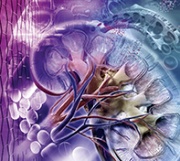 A systematic review and meta-analysis, published in The Lancet Diabetes & Endocrinology, found that in patients with type 2 diabetes SGLT-2 inhibitors reduced the risk of dialysis, transplantation or death by kidney disease by 33%, and also reduced end-stage kidney disease by 35% and acute kidney injury by 25%. For the review, Australian experts teamed up with international researchers to assess four randomised clinical studies evaluating empagliflozin, dapagliflozin and canagliflozin and including more than 38,000 participants.

Associate Professor Sof Andrikopoulos, CEO of the Australian Diabetes Society (ADS), welcomed the findings as confirmation of the renal benefits shown earlier this year in the Canagliflozin and Renal Outcomes in Type 2 Diabetes and Nephropathy (CREDENCE) trial, which was included in this review. ‘One of the important findings of this meta-analysis is that these drugs reduce the risk of acute kidney injury,’ he told Medicine Today.

Associate Professor Andrikopoulos further noted that the renoprotective effects of SGLT-2 inhibitors extended beyond the current indications. The two SGLT-2 inhibitor drugs marketed in Australia – empagliflozin and dapagliflozin – are contraindicated in people with a consistent estimated glomerular filtration rate (eGFR) below 45 mL/min/1.73 m2. ‘We now have clinical evidence of benefit down to a eGFR of around 30 mL/min/1.73 m2,’ he said, adding that the TGA and the PBAC now needed to consider changing the approved indications to reflect this evidence.

However, the ADS has also issued an alert that SGLT-2 inhibitors may increase the risk of severe diabetic ketoacidosis and recommends that the drugs be ceased at least three days before surgery. Associate Professor Andrikopoulos said other side effects included genital infection and dehydration.

In an accompanying commentary, Professor Richard Gilbert of the University of Toronto, Canada, wrote: ‘After years of stagnation, we are now on the brink of a new paradigm in the prevention and treatment of kidney disease in people with type 2 diabetes.’