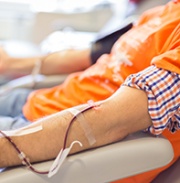 By Bianca Nogrady
Shortening the interval between blood donations is not associa­ted with negative impacts on donors’ quality of life, physical activity or cognitive function, a new UK study suggests. How­ ever, an Australian expert has noted that a more important challenge is getting existing donors to donate at even close to the current permitted frequency of blood donation.

The protocol included a program of email, text message and telephone reminders about donation.

Researchers saw no significant differences between the groups in quality of life, physical activity or cognitive function. However, they did note a moderate increase in self­ reported symptoms, such as feeling faint, tiredness, breathlessness, dizziness and restless legs, in the groups assigned to more frequent donations, particularly among men.

There were also significantly more deferrals for low haemo­globin, and lower mean haemoglobin and ferritin con­centrations in the more frequent donation groups compared with the standard frequency groups.

Commenting on the study, Professor David Irving, Director of Research and Development at the Australian Red Cross Blood Service, said although the outcomes in terms of quality of life weren’t such a surprise, the strongest message was the value of regular reminders.

‘We get an average of about 1.5 donations a year per donor, and about half of our donors will return more frequently than that,’ Professor Irving told Medicine Today, pointing out that the minimum interval between whole blood donations in Australia is 12 weeks.