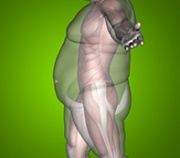 By Jane Lewis
Two studies published in the British Medical Journal investigating the association between body mass index (BMI) and mortality have confirmed that not only weight, but also weight changes across an individual’s lifespan, are important factors.

The first study, a large meta-analysis of cohort studies, investigated the dose–response curve of BMI and all-cause mortality risk; the second focused on how weight trajectories in early and middle life influence mortality in older adults.

Commenting on the studies, Professor Timothy Gill from the Boden Institute of Obesity, Nutrition, Exercise and Eating Disorders in Sydney said while the studies add to our understanding of the importance of BMI, in many ways their findings reinforce old messages.

‘This topic has been looked at in depth and there have been fairly consistent findings over the years around the relationship between BMI and mortality,’ he told Medicine Today. ‘However, there has been some disagreement about where the nadir is, and how quickly it rises from this point, raising the question of where exactly does the minimum risk associated with BMI lie?’

According to the results of the meta-analysis, which included 230 studies with over 30 million participants, the answer to this question depends on smoking status, with the nadir in the BMI range of 23 to 24 kg/m2 among never smokers and 22 to 23 kg/m2 among healthy never smokers, moving to 20 to 22 kg/m2 with longer duration of follow up.

‘These results reaffirm traditional WHO cut points for BMI, with the lowest risk sitting somewhere between BMI 20 and 25 kg/m2,’ commented Professor Gill. ‘Thereafter it tends to rise, and certainly it accelerates above 30 kg/m2.’

In the second study, data from two large US prospective cohorts were used to investigate associations between changes in body shape over time and mortality. Participants (80,266 women and 36,622 men) recalled their body shape at ages 5, 10, 20, 30, and 40 years, provided BMI at age 50, and were followed from age 60 over a median of 15 to 16 years. Heavy body shape from age 5 to 50, especially an increase in middle life, was associated with higher mortality, whereas people who consistently maintained a lean body shape had the lowest mortality.

‘Weight history is clearly very important,’ said Professor Gill. ‘There is an independent risk associated with gaining weight, over and above your absolute weight.’

Commenting on the limitations of epidemiological studies, he stressed that while population data are useful as a guidance tool, ‘they do not apply to everybody, and can only ever be the starting point for clinical decision making.’