Bilateral erythematous plaques on the legs

Bilateral erythematous plaques on the legs

A 64-year-old man presents with a four-year history of progressive bilateral discolouration of the lower legs. Over the preceding four weeks, his symptoms have worsened, with increasing pruritus, pain and erythema and the development of weeping bullae and erosions. He is systemically well with no fever.

The patient, who is a retired chef, has type two diabetes and obesity. He is a nonsmoker and has two standard drinks per week.

On examination, bilateral erythematous to purplish plaques are observed on the inner aspects of the patient’s lower legs (Figure 1a). The plaques are indurated and firm and surrounded by haemosiderin deposition. There is a small bulla on the right plaque and three small erosions with a haemorrhagic crust (Figure 1b). Milia are observed on both legs (Figure 1c). The patient has Fitzpatrick skin type II.

Conditions to consider for a patient presenting with symmetrical plaques on the lower limbs include the following.

Pretibial myxoedema
Pretibial myxoedema is characterised by induration of skin on the anterior shin due to deposition of mucin (glycosaminoglycans) within the reticular dermis.1 Increased synthesis of glycosaminoglycans, which is thought to be caused by stimulated fibroblasts, promotes dermal oedema by retaining fluid in the skin, resulting in compression and occlusion of lymphatic vessels and leading to lymphoedema.2

Pretibial myxoedema presents as waxy, indurated nodules or plaques that are usually erythematous to skin-coloured but sometimes purple-brown or yellowish.1 The lesions are characteristically associated with a diffuse nonpitting oedema and peau d’orange appearance.1 The condition is often asymptomatic or mild. However, the plaques can be painful and pruritic and there may be hyperhidrosis or hypertrichosis over the affected skin.1

A diagnosis of pretibial myxoedema is typically made clinically. Skin biopsy is rarely necessary, especially if there is a history of hyperthyroidism or Graves’ ophthalmopathy.

For the case patient, whose plaques were located on the inner legs, pretibial myxoedema was an unlikely diagnosis. Haemosiderin deposition is not seen in pretibial myoedema, and the patient reported pain and pruritus, which are typically absent in this condition. In addition, he had no signs of Graves’ disease and his thyroid function was normal.

Cellulitis
Cellulitis is a common bacterial infection of the deep dermis and subcutaneous tissues and a global health burden.5 In 2013-2014, cellulitis accounted for more than 250,000 hospital bed days and 11% of all potentially preventable hospitalisations in Australia.6

Cellulitis usually presents acutely with systemic symptoms such as fever, a rapidly progressive and poorly demarcated erythema with associated warmth, swelling and tenderness and lymphadenopathy. It is usually accompanied by a leucocytosis. There may be associated signs of sepsis. Patients with underlying immunosuppression, diabetes or a history of cellulitis or peripheral arterial disease are at increased risk.

Cellulitis is often misdiagnosed, particularly in the inpatient setting. A US study found that in a subgroup of hospitalised patients who were reviewed by a dermatologist for the evaluation of cellulitis, 74% had been given a diagnosis of a cutaneous condition mimicking cellulitis (pseudocellulitis), and therefore misdiagnosed.7 In a separate study, researchers extrapolated that cellulitis misdiagnosis leads to 50,000 to 130,000 unnecessary hospitalisations and up to US$515 million in avoidable healthcare spending annually.8

For the case patient, a diagnosis of cellulitis could be excluded. He did not present with any systemic features, and cellulitis is overwhelmingly unilateral and the involved area enlarges quickly.

Necrobiosis lipoidica typically occurs in young to middle-aged adults and it has a preponderance in women (women:men about 3:1).9 It is generally diagnosed clinically, although a skin biopsy may be performed for confirmation. The pathogenesis is unknown.

The lesions of necrobiosis lipoidica begin as painless, firm papules that gradually enlarge and develop a palpable, violaceous to red-brown rim and a yellow-brown atrophic centre with telangiectasias.9 The pretibial region is most commonly affected. The plaques are usually multiple and bilateral, and over time they can become accompanied by dysaesthesia, pruritus or pain. Ulceration occurs in 33% of patients.10

Although the case patient has diabetes, the morphology of his skin disease was not consistent with necrobiosis lipoidica (lack of peripheral rim, telangiectasias or yellow-brown central atrophy). Furthermore, its location in the gaiter region and prominent haemosiderin staining made other diagnoses more likely.

Lipodermatosclerosis
This is the correct diagnosis. Lipodermatosclerosis (sclerosing panniculitis) is a common entity within the clinical spectrum of chronic venous insufficiency of the lower extremities, which is linked to the upright position. The prevalence of chronic venous disease is difficult to capture and varies worldwide but increasing prevalence with age is observed universally. In central Europe, about 15% of the adult population have symptoms of chronic venous insufficiency and about 1% have venous ulcers.12 Chronic lipodermatosclerosis may be preceded by an acute inflammatory stage that presents as erythematous, firm plaques that are warm and tender – this is often mistaken for cellulitis.

The most important causative factor is incompetence of the deep leg veins.12 Obesity, immobility, prolonged standing and reduced calf pump activity may exacerbate impaired venous return.13 Slow blood flow and reflux lead to varicosities and saturation of the microcirculation that distend and damage capillaries, leading to leakage of fluid and proteins into tissue and extravasation of erythrocytes that causes iron deposition in the skin and haemosiderin staining.12 Pooled or static leukocytes become activated, initiating an inflammatory cascade that leads to cellular and tissue destruction; this results in inflammation of subcutaneous fat that becomes replaced by fibrosis, further impeding venous and lymphatic flow and leading to oedema above it. Lipodermatosclerosis begins on the lower medial aspect of the lower leg and eventually the entire lower-third may become involved. Significant narrowing of the lower leg may occur, such that it resembles an ‘inverted champagne bottle’.

Both microangiopathy and chronic inflammation are likely to be responsible for venous eczema that typically occurs in the same region (i.e. medial supramalleolar) where microangiopathy is most intense.12 Patients often apply topical agents to combat the pruritus and dry skin, which increases the risk of sensitisation and contact dermatitis.12

Venous insufficiency is the most frequent cause of ulceration of the lower leg. It has been proposed that the microvasculature becomes surrounded by cuffs of fibrin that impede the diffusion of oxygen, nutrients and growth factors to surrounding tissues, rendering them unavailable for wound repair.12

For the case patient, the supramalleolar location, induration and haemosiderin staining of the plaques were consistent with chronic lipodermatosclerosis that has recently become exacerbated. This exacerbation is evidenced by his increasing symptomatology and development of weeping bullae and erosions, which indicate saturation of the microcirculation of the skin. The milia indicate previous skin injury. His prior occupation (as a chef), which would have involved prolonged periods of standing, also supports the diagnosis.

The mainstay of therapy for lipodermatosclerosis is management of the underlying venous hypertension. Patients should be instructed to elevate their legs (above the heart) when seated and to avoid prolonged standing to relieve pressure from the saturated venous system.12 Leg elevation alone may be the only treatment required for patients with mild chronic venous disease. There may also be a need for compression bandages or stockings (minimum 20 to 30 mmHg) to improve venous return, which should be put on first thing in the morning and removed only when the patient is recumbent (usually just before going to bed). It is important to assess patients for an ankle-brachial index (ABI) because compression therapy is contraindicated in peripheral arterial disease (bearing in mind that the ABI may be falsely high in patients with diabetes).

Topical treatment includes judicious use of corticosteroids and emollients, noting that ointments rather than creams are recommended because the latter usually contain more preservatives, which may lead to an allergic contact dermatitis. Antibiotics may be required for superimposed infections.

The management of comorbid conditions such as diabetes mellitus, obesity and peripheral oedema must be optimised. Patients should be encouraged to increase their physical activity and to cease smoking, which is imperative to improve healing of chronic wounds.

Ulcers should be kept moist with a semipermeable dressing that allows oxygen and moisture (but not water) to pass through. Ulcer dimensions should be regularly documented. Frequent manipulation of wounds and dressings should be avoided; dressings can be changed as infrequently as once weekly, depending on the drainage. Topical timolol has been shown in small studies to reduce the size of venous ulcers compared with saline (off-label use).14 Once ulcers are healed, compression stockings should be used regularly to prevent recurrence.

Patients with lipodermatosclerosis that is refractory to conservative treatment or persistent venous ulcers should undergo duplex ultrasound examination. Surgical intervention (such as vein transplant, repair or removal) may be required but will not replace the need for ongoing compression therapy.12

It is important to explain the pathogenesis of chronic venous disease to patients as it directly informs how lipodermatosclerosis is managed. Patients may be more willing to comply with tiresome compression garments and instructions for leg elevation if they understand the rationale behind this.

The case patient was educated about the series of events leading to an exacerbation of his condition, which helped to develop rapport and encourage compliance. He diligently undertook leg elevation and applied his compression stockings, which led to prompt and sustained resolution of his pruritus; this was aided by topical betamethasone dipropionate 0.05% ointment applied twice daily for one week. He has been prescribed topical timolol to apply to any lesions that begin to appear ulcerated.

Chronic venous disease is a common condition that places a large economic burden on the healthcare system. Compression therapy and leg elevation are essential for management, after potential comorbid peripheral arterial disease has been excluded. Acute lipodermatosclerosis is a common mimicker of cellulitis, and physicians must be able to accurately distinguish between these conditions – cellulitis is very rarely bilateral, which is an important clue. Referral to a dermatologist is recommended for patients with chronic venous disease that is resistant to treatment. 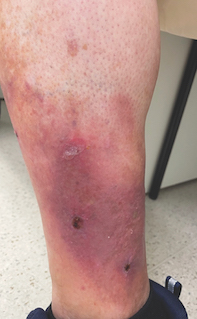 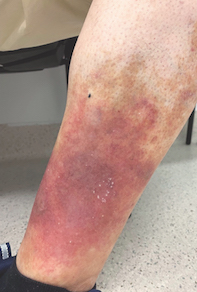 Figures 1a to c. Erythematous to purplish plaques on the case patient’s lower legs (a, top). There is a small bulla visible on the right leg (b, centre) and milia on both legs (c, above).

A pregnant woman with a pruritic eruption
Recurrent, painful nodules on a girl’s legs
Atopic dermatitis – an update on management in general practice
COVID-19 manifestations in the skin
A man with bilateral pink plaques in the axillae