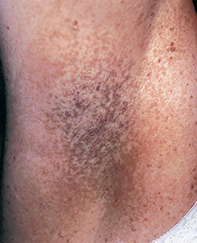 Figure 1. Reticular pigmentation and papules on the axilla.

A 34-year-old woman gave a 10-year history of asymptomatic mottled pigmentation localised to both her axillae (Figure 1) and groins. The pigmentation had a papular element and was persistent. Her mother and sister were similarly affected.

Hyperpigmentation of the axillae may be seen in a range of conditions, including the following.

Reticular pigmentation of the axillae may represent a rare genetic anomaly that can be mistaken for a number of other processes.

Associate Professor Kossard is Director of Dermatopathology at the Skin & Cancer Foundation Australia, Darlinghurst, Sydney, NSW.
This article was first published in Medicine Today in March 2004. It was reviewed and updated in November 2012.