A child with severe wrinkling of the skin of the palms

A child with severe wrinkling of the skin of the palms

A 12-year-old girl presents with a lifelong history of rapid severe wrinkling of the skin of her palms after minimal exposure to water. The episodes are asymptomatic and self-resolve within 40 to 60 minutes after drying. Her soles are not affected.

The girl’s medical background is unremarkable. Her parents have accepted the palm skin wrinkling as normal for her, but they are concerned about the appearance and wondering if anything can be done about it.

On examination, before water exposure there are no gross abnormalities of the patient’s palms or other skin areas. After simple wetting of her palms in a stream of water from a tap her palms promptly wrinkle, with the formation of oedematous whitish plaques and papules (Figure). She does not complain of discomfort, pruritus or pain. After drying, her palms return to normal.

This condition is called aquagenic wrinkling of the palms (AWP). Causes to consider include the following.

The diagnosis of AWP is based on a clinical history and physical examination. Genetic testing for CF carriage is recommended for future genetic counselling.

There is currently no targeted therapy for AWP. However, some patients have reported relief with antiperspirants such as daily 20% aluminium chloride hexahydrate, bathing the affected area (typically just the hands) in salt water, and supportive therapies such as antihistamines to reduce itch (not a common feature). Botulinum type A toxin injections have been reported to be successful, even in patients without known hyperhidrosis.11 It is important to be aware of this skin sign because it is a diagnostic clue that a patient may be a CF carrier or have atypical CF, which has important clinical consequences for the patient and their future progeny.12

With the advent and approval of small molecules such as ivacaftor, lumacaftor and tezacaftor that directly target the malfunctioning chloride channel that the CFTR gene encodes, it may be possible that in future topical formulations of these drugs may be applied to patients with AWP. 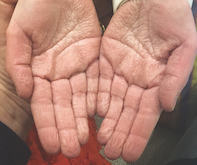 Figure. The girl’s wrinkled palms after exposure to a stream of tap water.