A 65-year-old man presents with a rapidly progressing diffuse petechial rash with associated malaise and fevers (Figure 1a). The rash was preceded by an insect bite on the right nasolabial fold that has evolved into an eschar (Figure 1b).

A high index of clinical suspicion is required for rickettsial infections because delayed or untreated infections have mortality rates between 10 and 60%.4 It is relatively uncommon in Australia and mainly found on the east coast from Queensland to Victoria.5 Tetracyclines (e.g. doxycycline) are the first-line treatment for suspected rickettsial infections, and serological testing to confirm the diagnosis should not delay initiation of therapy.4 Failure to commence treatment within five days of onset is associated with a significant increase in mortality, with complications including disseminated intravascular coagulation and gastrointestinal haemorrhage.4

For this patient, a provisional diagnosis of rickettsial infection was made and he was commenced on oral doxycycline 100mg twice daily. There was a rapid improvement in his clinical condition within 24 hours. Serological testing was performed prior to initiation of treatment and later returned a positive result. 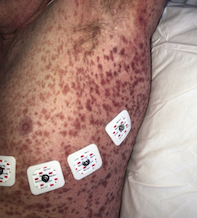 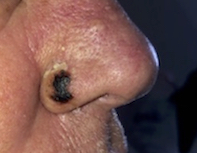 Figures 1a and b. The case patient at presentation. a (top). The diffuse, nonblanching, petechial eruption. b (above). The necrotic eschar on the nasolabial fold that preceded the rash.

Diffuse petechial rash in an unwell febrile patient
Unwanted souvenirs – a leg ulcer and nasal ulceration in a returned traveller from South America
Blastocystis infection: to treat or not to treat?
Parasites in travellers: a brief guide
Ticks: human health and tick bite prevention