A linear lesion on a girl’s leg 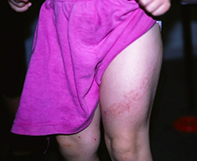 Figure. The linear lesion on the girl’s leg.

An 8-year-old girl presents with a six-week history of an erythematous linear lesion on her left thigh (Figure). It is slightly raised and scaly but not itchy. The girl has been previously well and the lesion developed quite suddenly, over a few days, and has persisted despite treatment with mometasone furoate 0.1% cream and miconazole cream.

Many skin conditions can manifest as linear lesions. The most likely cause of the sudden onset of such a lesion in an 8-year-old child is lichen striatus, a benign, transient linear eruption that follows the developmental lines of Blaschko (embryonal lines along which the skin develops). Lichen striatus is a self-limiting condition that lasts from a few months to three years and may at times relapse. It is not rare and is much more common in children than adults (the median patient age is 2 years).

Lichen striatus is usually erythematous but it may be hypopigmented or hyperpigmented, particularly in children with dark skin. It most commonly occurs on the limbs but can occur anywhere on the skin surface. It is generally asymptomatic.

The cause of lichen striatus is unknown. However, it has been postulated that children who develop it have a genetically different clone of cells as a result of a postzygotic mutation that reacts to viral triggers with a persistent eruption.1

There is no effective treatment for lichen striatus. The condition is harmless and self-limiting, so reassurance is all that is usually needed.