A man with erythematous and swollen hands

A man with erythematous and swollen hands

A 45-year-old man presents to the emergency department with a two-day history of progressive erythema and swelling affecting both hands (Figures 1a and b). He complains that they are painful and itchy.

The patient has a long history of a chronic scaly rash affecting the palms of both hands but has not had a similar acute rash before. He has been using an antiseptic hand wash for the past seven days because of increasing scale on his palms.

On examination, an erythematous vesiculobullous eruption is observed over the palmar and dorsal surfaces of both the patient’s hands. The rash extends to the dorsal forearms. Apart from lichenified, scaly skin over the extensor surfaces of his elbows, his skin is normal.

Identification of allergic contact dermatitis is mainly based on clinical suspicion, supported by resolution on withdrawal of the suspected allergen. Swabs of the rash should be performed to identify any secondary bacterial infection. Patch testing with the suspected allergen and the Australian Baseline Series is required to confirm the diagnosis.1

Management of allergic contact dermatitis is twofold. Firstly, the acute rash is managed with withdrawal of the likely allergen and treatment of symptoms. Potent topical corticosteroids, such as betamethasone dipropionate ointment, are used with wet dressings to reduce itch and inflammation. A short course of oral prednisone 25 mg daily is also effective. Oral antibiotics may be required to treat any secondary infection. After the acute episode, avoidance of irritants and use of emollients is required for up to three months because the injured skin can remain vulnerable.

For this patient, the eruption was treated with a two-week course of oral prednisone, topical betamethasone dipropionate 0.05% twice daily under wet dressings and cephalexin 500 mg four times daily for five days. After two weeks, he had recovered with desquamation and subsequent dryness and sensitivity which was managed with emollients and soap avoidance. He was advised to continue this for three months.

Patch testing was performed and the antiseptic chloroxylenol identified as the culprit. Allergen avoidance was advised to prevent further episodes. In some patients, especially those with occupational exposure to the allergen, this may prove very difficult, but fortunately this patient was easily able to avoid the product. 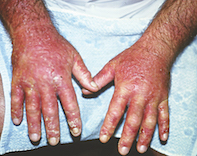 Figures 1a and b. Case patient. The erythematous eruption affecting the palmar (a, top) and dorsal (b, bottom) surfaces of the hands.

A woman with diffuse skin-coloured nodules
Bullae in an older man after a fall
A rapidly progressing, blistering eruption in a febrile patient
A sudden outbreak of facial papules and pustules
Recurrent painful intertriginous nodules