A photodistributed rash in a malnourished patient 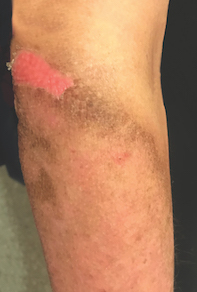 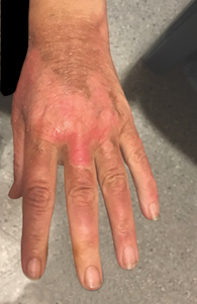 Figures 1a and b. The rash on the patient’s forearm (top) and hand (above).

Figure 2. The rash on the patient’s ankles and feet, with oedema and bullae.

A 48-year-old woman presents with a three-week history of pruritic erythema on the dorsal aspect of her forearms and hands (Figures 1a and b) and feet (Figure 2). The eruption is sharply marginated, hyperpigmented and hyperkeratotic. Over the past 24 hours, she has developed bilateral ankle and foot oedema surmounted by tense bullae (Figure 2). The eruption is photodistributed; there is no rash on any other area of her skin.

The patient is otherwise well. She explains that she underwent gastric sleeve surgery three months previously. She became homeless recently and is living in a refuge.

Pellagra is progressive and can be fatal if not treated. Treatment involves nicotinamide 500 mg/day, to which there is a dramatic response. When present, neuropsychiatric symptoms improve within the first 24 to 48 hours of treatment whereas cutaneous disease may take a few weeks to subside. Nicotinic acid is often avoided because it can cause headaches and flushing.

In this patient’s case, pellagra appeared to be a consequence of prior gastric surgery in combination with a poor diet. As the niacin deficiency was a result of decreased dietary intake, a multidisciplinary approach was taken to help resolve the underlying social issues. Her rash resolved rapidly, within a few days of commencing a normal diet.

An area of cutaneous atrophy on the abdomen
Treating acne – how to minimise physical and emotional scarring
Diffuse linear streaks on the trunk and limbs
Keratinocyte skin cancers: diagnosis and current management
Recurrent, painful nodules on a girl’s legs