Pruritic bullae on a girl’s arms and legs

Pruritic bullae on a girl’s arms and legs

A 9-year-old girl presents with her mother, who is worried about bullae that have developed on the child’s lower and upper limbs during the recent summer (Figure 1). The lesions occur after the girl’s tennis lessons, persist for two to three days and then ­subside, and are followed by crusting and healing with post-inflammatory hyperpigmentation. The lesions are intensely pruritic and have tended to become infected.

The girl moved to Australia from the UK a year ago. She is otherwise well.

The diagnosis of bullous insect bite reactions is based on history and examination. Although patients may not remember being bitten specifically, they may suspect it based on their location when the lesions appeared. In this case, the girl’s parents strongly suspected that the child was bitten at the tennis courts, which were located next to a swampy area with many insects around.

Although rare, a severe reaction to insect bites occurs in patients with chronic lymphocytic leukaemia and other haematological malignancies.1 The reaction to the bites can precede diagnosis or indicate relapse, and therefore further evaluation or investigations for haematological malignancies should be considered, particularly if the patient is unwell or has desensitised to insect bites in the past.

Management of bullous insect bites involves symptomatic relief, treatment of superinfection, and prevention of subsequent bites. The itch can be mitigated with oral antihistamines (e.g. loratidine), and a potent topical corticosteroid such as betamethasone dipropionate 0.05% ointment should be applied to the lesions. If infection is present, treatment with oral antibiotics is indicated. Prevention of insect bites can be accomplished by avoiding stagnant bodies of water, wearing clothing with long sleeves, using insect-repelling electrical devices or burning coils, and applying insect repellents. The most effective insect repellents tend to be products that contain DEET. The reactions will slowly subside as the patient is desensitised to insect bites, and the prognosis is good. 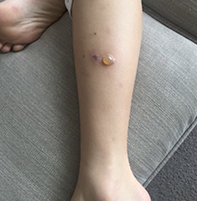 Figure 1. Bullae and post-inflammatory hyperpigmentation on the patient’s leg. 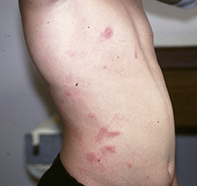 A woman with skin-coloured periorbital papules
Skin lesions in darker skin phototypes
Skin surgery in general practice: delivering the optimal outcome
Red-pink papules around a scar on the eyebrow
Diffuse linear streaks on the trunk and limbs