A 10-month-old boy presents with a six-week history of a pruritic eruption (Figure). He has been otherwise well, with no antecedent fevers, rhinorrhoea, cough, dyspnoea, anorexia or diarrhoea. His past medical history is otherwise normal and his immunisation record is up to date. Aside from cradle cap, he has had no other dermatological issues.

No other members of his family or any close contacts at his daycare centre have had a skin eruption of similar appearance. There is no family history of atopic dermatitis or psoriasis. His parents deny any antecedent trauma or insect bites but noticed that the onset of the rash coincided with a family holiday. They have two dogs, which live in their house.

On examination, diffusely scattered, excoriated papules and pustules are observed on the child’s face, arms, legs and trunk. He is well and interactive. There is no involvement of mucosal surfaces, dermographism or lymphadenopathy. The lesions do not urticate.

Conditions to consider among the differential diagnoses for a child with a persistent, diffuse maculopapular and pustular eruption include the following.

The diagnosis of papular urticaria is mostly clinical and requires a targeted history to discern environmental exposures that coincided with the onset of the skin eruption. Although initial exposures to arthropods induce an immediate hypersensitivity reaction (type I), lesion persistence and/or recurrence is due to ongoing reactivation of delayed-type hypersensitivity reactions propagated by repeated exposure to arthropod antigens, which may take up to six weeks to resolve (provided that the inciting arthropod exposure is removed).6 The lesions resolve spontaneously when the child has become desensitised to the inciting arthropod antigen and/or the exposure is removed from the environment.

The treatment of papular urticaria is mostly symptom relief, with antihistamines and high-potency topical corticosteroids to treat intense pruritus. Infection control with a topical antibiotic such as mupirocin is helpful because these lesions often become superinfected as a result of scratching.

Prevention is crucial to prevent further exposure to arthropod antigens. Children should wear clothing with long sleeves and insect repellent while outdoors, particularly after dusk. Stagnant water that could encourage mosquito propagation should be removed from the garden and surrounds. Household pets should be treated for flea infestations, and household pesticide fumigation may be required for prolonged cases.

In this patient, a skin biopsy was performed to exclude sinister diagnoses such as paediatric Sweet syndrome. A punch biopsy showed a predominantly eosinophilic cellulitis involving the dermis (superficial more so than deep). There were also scattered ‘flame figures’ to the superficial dermis. There was no evidence of vasculitis or malignancy. He commenced treatment with potent topical corticosteroids for symptomatic lesions and oral antihistamines for persistent itch, which subsequently improved. The source of the reaction was assumed to be fleas, and the family were encouraged to treat the dogs and eradicate their residence of arthropod infestation. The child’s skin eruption subsequently resolved over the following months. 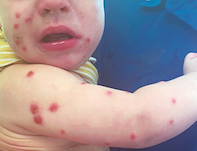 Figure. Crusted erythematous papules and pustules on the face and arm (case patient).