A pruritic rash on the lower legs and arms

A pruritic rash on the lower legs and arms

A 10-year-old girl presents with a six-month history of an intensely pruritic rash mainly over the extensor surfaces of her lower legs and arms. She is otherwise well. Six years previously she had been referred to a dermatologist for management of atopic dermatitis, and then discharged to the care of her GP.

On examination, erythematous, excoriated nodules are observed bilaterally over her lower legs, knees, forearms and the dorsal surface of her fingers (Figures 1a and b). Several of the nodules over her knees are ulcerated.

No other members of her family have a skin problem.

Prurigo is usually a clinical diagnosis in children. The choice of investigations required will depend on the individual patient. In adults, there are many conditions associated with generalised pruritus that should be excluded, including biliary cirrhosis, end-stage renal disease and polycythaemia vera. A skin biopsy may be appropriate if the provisional diagnosis is not clear or if the condition is refractory to treatment.

Treatment of prurigo can be difficult. The first step is focused on preventing ongoing skin picking and scratching. Potent topical corticosteroid ointments such as betamethasone dipropionate used under wet dressings, particularly overnight, are first-line treatments to manage the pruritic nodules. For nodules that remain refractory to treatment, UV therapy or calcineurin inhibitor (tacrolimus ointment [compounded medication, off-label use in Australia] or pimecrolimus cream) may be considered. It is also important in prurigo to manage the underlying cutaneous or systemic disease. In children with eczema and psoriasis, this can sometimes involve the use of oral immunosuppressive agents. In the case of psychological conditions, referral to a psychologist or psychiatrist may be appropriate.

For the patient described above, the itch was suppressed successfully with twice-daily betamethasone dipropionate ointment, nightly wet dressings and an antihistamine as a night sedative. The nodules flattened within one month but areas of hyperpigmentation remained for almost 12 months. Figure 1a. Nodules on the patient’s lower legs. 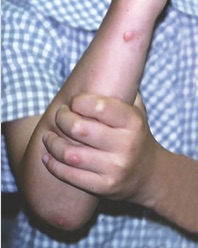 Figure 1b. Nodules on the patient’s hands and forearms. A girl with an itchy vesicular rash
A pruritic rash on the lower legs and arms
Scalp pruritus: easing the itch
Pruritus: understanding the causes, soothing the itch
The itchy scalp