A 95-year-old woman presenting for a routine skin examination reports scaling and itching on her cheeks and forehead and the dorsum of her hands and feet. She has a history of nonmelanoma skin cancers, including invasive squamous cell carcinomas (SCC). She describes living and working in the tropics as a missionary and recalls sun baking with coconut oil in her youth and experiencing a number of severe blistering sunburns.

The patient’s comorbidities include hypertension, ischaemic heart disease and hypercholesterolaemia, treated with a thiazide diuretic, clopidogrel and atorvastatin.

The patient has Fitzpatrick type II skin and blue eyes. Examination reveals hyperkeratotic papules on her cheeks against a background of photodamaged skin and dilated capillaries bilaterally (Figure 1a). There are also hyperkeratotic papules on an erythematous base against a background of photodamaged and photoaged skin on her hands and feet (Figures 1b and c).

Conditions to consider in a patient presenting with red scaly papules and plaques on sun-exposed sites include the following.

Disseminated superficial actinic porokeratosis
This is a disorder of keratinisation that is usually inherited in an autosomal dominant fashion.1 Clinical features of disseminated superficial actinic porokeratosis (DSAP) include the development of multiple skin-coloured or red-brown coloured papules or plaques with a scaly rim on sun-exposed sites – typically the forearms and pretibial skin, and usually sparing the face.

The peak onset for DSAP is in the third and fourth decades of life.1 Risk factors include exposure to ultraviolet (UV) rays and immunosuppression; women are more likely to present with DSAP than men. DSAP lesions are distinguished by their clinical features but biopsy is diagnostic, showing the characteristic cornoid lamella (thin columns of parakeratosis extending through the epidermis), which can be missed if the edge is not sampled.1 In some reports, up to 3.4% of DSAPs have progressed to SCC, so ongoing monitoring with skin examinations is warranted.1

Squamous cell carcinoma
Cutaneous SCC, which is the second most common type of skin cancer, is a malignant neoplasm of the keratinocytes that has a higher risk of metastasis than basal cell carcinoma (BCC).2 The molecular pathogenesis of SCC implicates many cell proliferation genes (e.g. RAS, CDKN2a, NOTCH1) but the most well-studied tumour suppressor gene involved is TP53, which is likely dysregulated due to chronic UV exposure.3,4

SCCs can arise anywhere on the body but are most common on the head, neck and dorsal surfaces of the upper and lower limbs. The appearance of invasive SCC ranges from large, ulcerated nodules to hyperkeratotic papules or plaques with ill-defined borders.5 SCC can arise from pre-existing actinic keratosis (AK) or Bowen’s disease (BD), and the differentiating factor is a nodular component, induration or area that is tender to palpation.3 Dermoscopy shows white circles, structureless areas and sometimes blood vessels. A hyperkeratotic lesion arising from a chronic wound should raise suspicion for occult SCC (Marjolin’s ulcer). Biopsy is essential to determine the grade of the tumour: low-grade SCC subtypes such as keratoacanthoma have low metastatic potential whereas high-grade/poorly differentiated SCC have a higher risk of recurrence and metastasis, especially if located on the head and neck.4

Risk factors for SCC include fair skin, sun exposure, increasing age, male sex and immunosuppression. Generally, the risk of SCC is higher for solid-organ transplant recipients than haematopoietic stem cell transplant recipients.4 HPV infection and lichen sclerosus can increase the risk of anogenital SCC. Patients with genetic syndromes such as xeroderma pigmentosum, dystrophic epidermolysis bullosa and dyskeratosis congenita are also at an increased risk of SCC.2,5

Bowen’s disease
Also known as squamous cell carcinoma in situ or intraepidermal carcinoma, Bowen's disease is a variant of SCC that exhibits full-thickness epidermal atypia confined to the epidermis and without breach of the basement membrane, meaning that it remains in the top layer of the skin and is ‘superficial’. BD is characterised by erythematous scaly plaques with well-demarcated but irregular borders and abundant surface scale. It can arise de novo anywhere but favours sun-exposed sites, and can progress from pre-existing AK.6 Biopsy is diagnostic and shows the same cellular atypia seen in invasive SCC; however, there is no infiltration of the dermis and it remains confined to the epidermis.5 Any de novo nodular components arising in pre-existing BD that are tender to palpation warrant tissue biopsy because the risk of progression to invasive SCC is between 3 and 5%.6

BD is common, with an annual incidence of approximately 15 per 100,000 per year in the UK, and 321 per 100,000 in Australians aged 14 years and older.6,7 Lesions usually arise in the seventh decade of life; most risk factors for BD are shared with that for SCC, with the exception of sex (BD is more common in women than men).6

Actinic keratosis
This is the correct diagnosis. AK (also known as solar keratosis) is a premalignant neoplasm of the keratinocytes, and presents as erythematous to pink or pigmented scaly papules and plaques that have a characteristic ‘rough’ texture and appear on chronically sun-exposed skin. Background chronic actinic damage and fair skin are clues to the diagnosis.8 AKs are mostly asymptomatic but can occasionally present with pruritus or pain. Hypertrophic AKs are characterised as well-defined papules and/or plaques with thick scale on an erythematous base, and can be accompanied by the development of a cutaneous horn.3 Actinic damage can involve the surface of the lips (actinic cheilitis) and appears as scaly plaques that can often involve the entire surface of the lip (usually the lower lip); in these cases the clinical distinction between AK and SCC is difficult and biopsy is warranted. Pigmented AKs lack the characteristic erythema but retain scale and adopt a hyperpigmented appearance that can often be mistaken for seborrhoeic keratosis, solar lentigo or lentigo maligna.

The same proliferative pathways implicated in the pathogenesis of BD and SCC are also affected in AK, as chronic UVB exposure (wavelength 290 to 320 nm) induces mutations via thymidine dimers in keratinocyte DNA and RNA.8 Histopathological features of AK include dysplastic keratinocytes residing in the basal layer and extending into the epidermis without dermal invasion, with accompanying solar elastosis (sun damage) and mild mixed dermal inflammatory (lymphocytic and plasma cell) infiltrate.8

AKs are treated by dermatologists as well as GPs. Many of the risk factors are nonmodifiable – these include low Fitzpatrick skin phototype, age, sex and cumulative sun exposure – so behaviour modification should be aimed at sun protection measures to limit further UV exposure, via sunscreen use, avoidance of unnecessary UV exposure and protective clothing.8 Adequate sun protection for the head and neck area of bald individuals is particularly prudent, as they are at higher risk of developing AKs.8 Patients with extensive actinic damage should be followed up at least annually for regular skin examinations. Although the reported risk of progression of an AK to SCC malignancy is estimated to be between 0.075 and 0.53% per lesion-year, any AK lesion that exhibits tenderness to palpation, ulceration or recurrence despite previous cryotherapy warrants histopathological sampling to exclude invasive SCC.9

Treatment of AKs can be categorised into single lesion-directed therapy and field therapy, with the former using modalities including cryotherapy, curettage and dermabrasion.8 Lesion-directed therapies are appropriate for limited numbers of AKs (six or fewer); more than six lesions should warrant consideration for field treatment.10 Agents used for field therapy include topical chemotherapy such as 5-fluorouracil (5-FU), immunomodulators such as imiquimod, combination 5-FU with calcipotriol, chemical peels, photodynamic therapy (PDT) and CO2 laser.8 5-FU is applied twice daily (5% cream) topically to affected areas for two to four weeks.10

This patient opted for a conservative approach to management, as her advanced age made her less motivated for an aggressive treatment approach or field therapy. As such, her thicker AKs were treated with cryosurgery, and regular follow-up has been arranged. Consideration will be given to changing her antihypertensive medication to a non-thiazide diuretic because thiazides have been associated with increased risk for BCC and SCC owing to their phototoxic potential.11 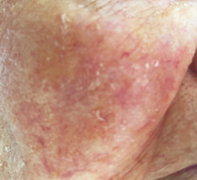 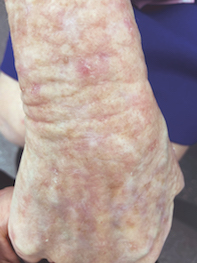 Figures 1a to c. Scaly papules on the patient’s cheek (a, top) and hand (b, middle), and widespread on the dorsal foot (c, above). Some of the lesions are on an erythematous base.