Widespread rash in a 6-year-old boy 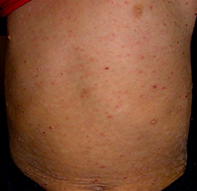 Figure 1. The rash on the patient’s trunk at presentation.

A 6-year-old boy presents with a rash that appeared two months ago and spread to involve his whole skin within a week. It is most severe on his trunk (Figure 1) but also involves his face and limbs.

Currently, the rash is not severely itchy and does not wake the patient at night. Nevertheless, his mother is concerned about it and the boy has been sent home from school by teachers who have been worried that he may have a contagious condition. The rash has persisted despite treatment with antifungal creams, oral antibiotics and topical corticosteroids.

PLC has a classic appearance on skin biopsy, which can be used to confirm a clinical diagnosis (Figure 2). However, a confident diagnosis can be made by dermatologists, particularly in children, based on the combination of scaly macules and papules, as well as hypopigmentation and vesicles when present. The uncommon nature of the rash makes it difficult for GPs to identify.

The initial rash of PLC is papulovesicular and it is often mistaken for chickenpox. However, chickenpox resolves in a few weeks, whereas the lesions of PLC evolve to crusted papules associated with pigment change.

The rash of PLC, although harmless, is often very persistent and can last from six weeks to months or years. It has been reported to respond to prolonged treatment with erythromycin and tetracycline, but UVB phototherapy is more reliable. Oral retinoids are useful in severe, persistent cases.