A 6-month-old boy with a vesicular rash

A 6-month-old boy with a vesicular rash

A 6-month-old boy presents with a rash that has developed and evolved over the past six days. His mother says that he has been increasingly ‘clingy’ and is eating less, especially less solid food, but he has not been febrile. He has a history of atopic dermatitis, which is well controlled with topical corticosteroids.

On examination, small vesicles are noted on the child’s face (Figure 1a) as well as on the soles of his feet and the palmar and dorsal surfaces of his hands (Figure 1b). His mother says that each of the vesicles initially appeared as a pink macule.

HFMD is usually diagnosed clinically on the basis of the characteristic distribution of vesicles over the hands, feet and mouth. Blood tests, if performed, demonstrate raised white cell count and C-reactive protein level. PCR can be performed to detect the viral aetiology – numerous serotypes have been implicated, with coxsackievirus A16 being the most common.

There are no specific treatments for HFMD. Parents should be advised that the blisters should not be ruptured and that the open wounds are contagious. Parents should be wary of the child’s oral intake if there are painful ulcers present in the mouth; in severe cases, intravenous fluids may be required. 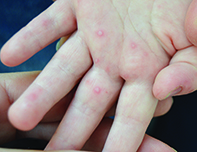 Figures 1a and b. Case patient: small vesicles on the child’s face (a, top) and hand (b, bottom).

Common skin problems in children. Infectious rashes and infestations
Overview of cutaneous fungal infections
Common and important skin rashes in primary care
A 6-month-old boy with a vesicular rash
Peeling of the palmar surface of the fingers

A woman with diffuse skin-coloured nodules
Bullae in an older man after a fall
A rapidly progressing, blistering eruption in a febrile patient
A sudden outbreak of facial papules and pustules
Recurrent painful intertriginous nodules