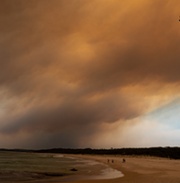 A study published in the British Medical Journal correlated 95,277,169 Medicare inpatient hospital claims in the US from 2000 to 2012 with daily levels of fine particulate pollution matter with a diameter less than 2.5 micrometre (PM2.5) measured in 1 kilometre-squared grid cells across the US for the same time period.

For the rarely studied disease groups associated with short-term exposure, such as septicaemia and renal failure, researchers found that each 1 microgram/m3 increase in PM2.5 was associated with an average annual increase of 2050 hospital admissions over the course of the study. This included 237 deaths at discharge, 570 discharges to skilled nursing facilities and 297 discharges to home healthcare service.

The authors calculated that the overall annual cost of short-term exposure to PM2.5 for the rarer conditions was US$31 million (AUS$44.6 million) in inpatient and postacute care costs and US$2.5 billion (AUS$3.6 billion) in the value of statistical life due to the lives lost at discharge. For conditions known to be associated with air pollution, those figures were US$69 million (AUS$99 million) and US$4.1 billion (AUS$5.9 billion), respectively.

Commenting on the study, Professor Bin Jalaludin, from School of Public Health and Community Medicine at UNSW Sydney said it was significant in finding associations between daily changes in air pollution and admissions to hospital not just for diseases that were known to be associated with air pollution, but also for other categories of diseases.

‘Now we’ve got to start thinking about how that might happen physiologically; how does air pollution affect our immune system or physiology to then lead to an obstruction of the gut?’ said Professor Jalaludin, who is also associated with the Centre for Air Pollution, Energy and Health Research.

He also said that this and other research on air pollution suggests that there was no ‘safe’ threshold of air pollution that was not associated with increases in a variety of health risks.
BMJ 2019; 367: l6258.