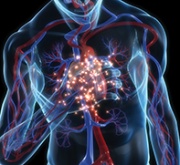 By Bianca Nogrady
An anti-­inflammatory drug targeting the interleukin-­1β pathway has shown significant reductions in recurrent cardio­vascular (CV) events, according to data from a phase III, randomised, double-­blind, placebo-­controlled trial.

A secondary analysis of the trial showed the drug, canakinumab, was also associated with significantly lower lung cancer incidence and mortality.

In the Canakinumab Anti­-Inflammatory Thrombosis Outcomes Study (CANTOS) – published in The New England Journal of Medicine and presented at the recent European Society of Cardiology Congress – 10,061 patients who had had a previous myocardial infarction (MI) and had a high ­sensitivity C­reactive protein level of 2 mg/L or more were rando­mised to either 50 mg, 150 mg or 300 mg of canakinumab or placebo administered subcu­taneously every three months.

After a median follow up of 3.7 years, patients treated with the 150 mg dose showed a statistically significant 15% reduction in the incidence of nonfatal MI, nonfatal stroke or CV death compared with placebo. This group also met a secondary end point that included hospitalisation for unstable angina with urgent revascularisation.

The industry-­funded trial found no difference in all-­cause mortality between the canakinumab groups and the placebo group, but patients taking canakinumab did show a significantly higher rate of fatal infection or sepsis compared with placebo.

Commenting on the study, Professor Garry Jennings, Chief Medical Advisor for the National Heart Foundation of Australia, said the results were ‘stunning’.

‘This study provides proof of concept that inflammation is a target for CV therapies provided the right pathways are addressed in properly selected people,’ Professor Jennings told Medicine Today.

‘Those in this study were already taking statins and the result suggests that there are now ways of addressing the residual mortality seen in people taking the best standard thera­pies for secondary prevention.’

A secondary analysis of the same study, published in the Lancet, found total cancer mortality was significantly reduced in the pooled canakin­umab groups compared with placebo, with a 51% reduction in patients on the 300 mg dose.

The effect was stronger for current smokers compared with past smokers.

Professor Neil Watkins, clinician-­researcher and Head of Cancer Developmental Biology at The Garvan Institute of Medical Research, Sydney, told Medicine Today that the findings put inflammation at the very top of factors driving these cancers.

‘What this suggests is that even if you smoke, suppressing inflammation can block the initiation or progression of lung cancer, even in the presence of the genetic toxins in smoke,’ Professor Watkins said.