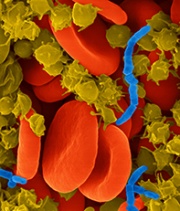 Antibiotic prescribing: identifying patients most at risk of sepsis

By Nicole MacKee
Older adults, those with frailty or those who have had a urinary tract infection (UTI) are most at risk of sepsis and would benefit from antibiotics, according to UK researchers, who say antibiotic use may be safely reduced in other groups.

In a cohort study of patients from more than 700 UK general practices, published in PLoS Medicine, researchers identified more than 35,000 episodes of sepsis. They found that the probability of sepsis was lower if an antibiotic was prescribed, but the number of antibiotic prescriptions required to prevent one episode of sepsis (number needed to treat, NNT) decreased with advancing age.

The researchers reported that at all ages, the probability of sepsis was greatest for UTI, followed by skin infection then respiratory tract infection (RTI).

‘This study shows that the probability of sepsis is very low indeed in younger patients and especially with RTIs, and, not surprisingly, higher in the elderly, frail and with urinary infections,’ Professor Thursky said.

While the prescription of antibiotics was more likely to be appropriate for UTIs, she said more education was needed.

‘The caveat is that there is a huge amount of overprescribing for asymptomatic bacteriuria or based on dipsticks,’ Professor Thursky said. ‘Understanding the appropriate diagnostic pathway for UTIs, and the early warning signs of sepsis is where education is needed.’
PLoS Med 2020; 17: e1003202; https://doi.org/10.1371/journal.pmed.1003202.