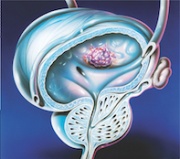 By Jane Lewis
The incidence of occupational bladder cancer appears to be on the rise, and this increase is occurring faster in women than in men, a systematic review published in JAMA Oncology suggests.

Although the profile of at-risk occupations has changed over time, it appears there may still be many occupations with an elevated risk of incidence of, or mortality from, bladder cancer, the UK authors of the review warned.

Speaking to Medicine Today, Associate Professor Andrew Brooks, Head of the Department of Urology, Western Sydney Local Area Health Network, said that some urinary carcinogens in the workplace had been identified and eliminated, leading to a reduction of the risk of bladder cancer in certain industries. However, the current study ‘confirms there are other agents related to bladder cancer by identifying occupational groups, rather than individual agents.’

‘Exposure to agents causing bladder cancer ought to be eliminated from the workplace,’ he said. ‘This study demonstrates that it remains an issue and clearly more effort is needed.’

The meta-analysis, which included 263 studies reporting on 1254 occupations (subclassified into classes), mostly in Western nations, found an increased incidence of bladder cancer in 42 out of 61 classes. Overall, the highest risks were for workers exposed to aromatic amines – including printers, hairdressers, and tobacco, dye and rubber workers – and those exposed to polycyclic aromatic hydrocarbons (PAHs) – including nurses, waiters, aluminium workers and seamen.

Bladder cancer mortality increased in 16 of 40 occupational classes, with the highest rates in workers exposed to heavy metals and PAHs (such as metal workers, aluminium workers and electricians) and those exposed to aromatic amines (including domestic cleaners, rubber workers and painters).

Analysis also showed that while the standardised incidence ratio for both sexes declined from the 1960s to the 1980s, this trend then reversed, with the ratio increasing to 1.13 for men and 1.27 for women during 2000 to 2010. Overall, the risk of disease-specific mortality was greater for men than for women.

The authors of an invited commentary published with the study pointed out that bladder cancer ‘continues to vary considerably by occupation, sex, and calendar time,’ suggesting these were ‘all indications that prevention is possible, and warranted.’

‘Workers around the world have the right to demand and get a safe and carcinogen-free workplace,’ they wrote.