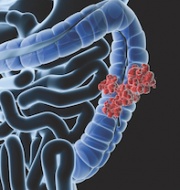 By Jane Lewis
Long­-term, continuous use of low­-dose aspirin, and long­-term high-­intensity use of other NSAIDs may reduce colorectal cancer (CRC) risk, suggest the results of a large population­ based study published in the Annals of Internal Medicine.

Previous findings about the effects of aspirin and non-­aspirin NSAID use on CRC risk have been ‘compelling’, say the study’s authors, although questions such as the optimum dose and duration of use remain unanswered.

In their study of Danish registry data from 10,280 patients with first-­time CRC and 102,800 control participants, the researchers found that continuous use of low­-dose aspirin (estimated daily dose 75 to 150 mg) for five years or longer was associated with a 27% reduced risk of CRC. Long­-term use of non­-aspirin NSAIDs was associated with a 30% to 45% reduction in CRC risk when used intensively, with the largest risk reduction seen in NSAIDs with the highest COX­2 selectivity.

According to the authors, the study’s main limitation was the lack of data on over-­the-­counter NSAID use, although such use was ‘restricted mainly to preparations of high-­dose aspirin and low-­dose ibuprofen.’

They also noted that potential use of NSAIDs for the prevention of CRC is limited by the risk for gastrointestinal bleeding and cardiovascular risks, and ‘these potential harms will need to be balanced against the chemopreventive benefits that our results indicate.’

Commenting on the study, Professor Michael Solomon, Academic Head of the Depart­ment of Colorectal Surgery at Royal Prince Alfred Hospital, Sydney, said that although the study found a modest association with continuous use of aspirin for five or more years, ‘the fact that 22.3% of colorectal cancer patients compared with 22.4% of controls ever used aspirin precludes this association as strong, and makes it tenuous at best.’

‘The massive numbers of people in the cohort sample, the multiple differing definitions of aspirin use, and inherent recall bias in remembering how much aspirin one took, combined with the inherent selection bias of case–control designs, make this an interesting study, but changes little in our under­standing of the aetiology of CRC,’ he told Medicine Today.