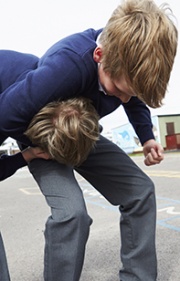 By Bianca Nogrady
Children who frequently bully but who are also on the receiving end of bullying are at the greatest risk of psychiatric problems in adulthood, a Finnish study has found.

In their prospective cohort study of 5034 children, the researchers investigated the association between bullying behaviour and experiences in children at the age of 8 years and the subsequent use of specialised psychiatric services at the age of 29 years.

They found that children who had regularly engaged in bullying behaviour but had also been victims of bullying had a more than twofold increase in the likelihood of receiving treatment for any psychiatric disorder, compared with children who had neither experience.

According to the study findings, published online in JAMA Psychiatry, this group were at particularly high risk of being treated for schizophrenia and nonaffective psychoses, after adjusting for family structure and parental education, although the association only had borderline statistical significance when accounting for psychiatric symptoms at the age of 8 years.

The authors pointed out that many of the children who were involved in bullying as well as being on the receiving end were male, and had other psychiatric symptoms at the age of 8 years.

Children who were regularly bullied were also at greater risk of having any psychiatric diagnosis by age 29 years, but in particular depression, compared with both children who bullied and children who had neither experience.

Bullying alone was only associated with later treatment for psychiatric disorders if the child showed psychiatric problems at 8 years of age.

‘Bullying–exposure to bullying behavior serves as an important red flag that intensive preventive or ameliorative interventions are warranted,’ the researchers wrote.

Commenting on the study, bullying expert Dr Kevin Runions said it often comes as a surprise to people to realise that bullying is not simply a moral problem and that children who bully are also at significantly greater risk of psychiatric problems later in life.

‘I often present to people a list of health outcomes associated with bullying and then tell them these are the kids who do the bullying,’ said Dr Runions, Senior Research Fellow and Project Director of the NHMRC-funded Beyond Bullying: Positive Change for All project at the Telethon Kids Institute, Perth. ‘The children who tend to be bully victims, who are on both ends of it, tend to be a little more out of control in general.’

Dr Runions told Medicine Today that the weight of evidence pointing to adverse psychiatric and other health outcomes from bullying and being bullied was becoming quite striking, and emphasised the need for a strong framework within schools to handle the issue of bullying.