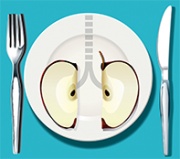 Diet and lung function: can eating fruit slow the decline?

By Jane Lewis
A diet high in fruit could delay the decline of lung function in adults, particularly ex-smokers, a 10-year investigation in adults from three European countries suggests.

‘In recent years, we have come to understand that our eating patterns can affect our lungs,’ commented Professor Lisa Wood, Head of the Nutrition Research Group in the Priority Research Centre for Asthma and Respiratory Diseases, University of Newcastle, and President of the Nutrition Society of Australia.

‘This study concurs with several large observational studies that have found a healthy dietary pattern rich in fruit, vegetables, fish and wholegrains can decrease the rate of lung function decline and reduce the risk of respiratory diseases, such as COPD and asthma, compared to an unhealthy diet,’ she said.

Subgroup analyses showed the results were ‘particularly strong’ in ex-smokers (comprising more than 40% of participants), leading the authors to suggest there was evidence that smoking modified the effect of fruit intake on FEV1 and FVC decline.

‘In conclusion, our study suggests that dietary factors might play a role in preserving ventilatory function in adults, by slowing down a decline in lung function. In particular, dietary antioxidants possibly contribute to restoration, following damage caused by exposure to smoking, among adults who have quit,’ they wrote.

According to Professor Wood, the link between fruit and vegetables and lung health was biologically plausible.