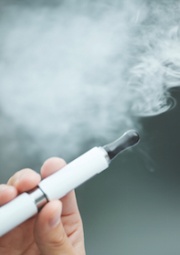 E-cigarette use may lead towards smoking

By Jane Lewis
The use of e-­cigarettes by adolescents and adults is associated with ‘progression along the trajectory to cigarette smoking,’ according to the authors of new research published in JAMA Pediatrics.

The US longitudinal cohort study comprised 694 participants aged 16 to 26 years who had never smoked cigarettes who completed surveys at baseline and after 12 months. Progression to cigarette smoking was defined using three states: nonsusceptible nonsmokers (NSNS; those who say they will definitely not smoke), susceptible nonsmokers (SNS; those who cannot rule out smoking), and smokers.

Baseline e­-cigarette use was shown to be independently associated with progression to smoking (adjusted odds ratio [AOR], 8.3) and to susceptibility among nonsmokers (AOR, 8.5).

‘These findings support regulations to limit sales and decrease the appeal of e­-cigarettes to adolescents and young adults,’ the authors stated.

Commenting on the findings, Professor Nick Zwar said that although the numbers of e­-cigarette users were low and there may be other influences that confound the association between baseline e­-cigarette use and initiation of smoking, the study ‘further raises concerns that the use of e­-cigarettes may “renormalize” tobacco smoking. This could set back progress on reducing tobacco use in the community, including in young people.’

‘Although e­-cigarettes are likely to be less harmful than tobacco smoking, we need to warn our patients that their use may be a gateway into smoking, and experimenting with them should be discouraged,’ advised Professor Zwar, Professor of General Practice at the University of New South Wales, Sydney.

The author of an accompany­ing editorial said the study was ‘one more piece of evidence that the effect of e­-cigarettes on youth is happening now in real time and that these products harm nonsmokers and result in a net harm to society and public health.’