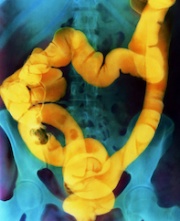 By Nicole MacKee
Oral antibiotic use may increase the risk of colon cancer and protect against rectal cancer, say researchers, but a leading Australian expert says many questions about a possible link remain unanswered.

A case-control study, published in Gut, found that oral antibiotic use was associated with a dose-dependent increased risk of colon cancer, but a decreased risk of rectal cancer, particularly with longer term use (more than 60 days). The increased risk of colon cancer was observed with minimal antibiotic use and was greatest in the proximal colon and with the use of antibiotics with antianaerobic activity. By antibiotic class, penicillins were consistently associated with an increased cancer risk in the proximal colon. Tetracycline use, on the other hand, was linked with a reduced risk of rectal cancer.

Using the UK’s Clinical Practice Research Datalink, the researchers matched almost 29,000 people with colorectal cancer with 137,000 controls. Participants were followed for a median of eight years.

Professor Graeme Young, Professor of Global Gastrointestinal Health at the Flinders Centre for Innovation in Cancer, Adelaide, said the researchers had accounted for factors such as BMI and smoking, but were unable to control for ‘crucial variables’ such as diet, physical activity and family history.

‘The effect size [shown in the study] is small at 8 to 9%,’ Professor Young said. ‘This sort of change in risk is smaller than the influence of diet, physically exercising or a family history.’

Professor Young said there was scientific credibility underpinning the association between antibiotic use and colorectal cancer risk, but it was ‘reasonably loose’.

‘We know that antibiotics disturb the microbiome,’ he said. ‘And there is quite a lot of evidence that factors relating to the microbiota in the colon do relate to your risk for colorectal cancer.’ But, he said, a person’s dietary fibre intake might counteract or augment the effect of an antibiotic.

‘There is quite likely to be an interaction between the nature of your diet and what the antibiotic does, and this research has given us no insight into that.’

He added that the opposing effects of antibiotics in different parts of the colon raised the possibility of a chance effect.

‘This is interesting information that may have scientific validity, but it is not yet ready for translation into practice,’ he said. ‘This is just another setting where the use of antibiotics can have adverse effects. The key message is: “don’t take antibiotics unless you really have to”.’
Gut 2019; 0: 1-8; doi:10.1136/gutjnl-2019-318593.