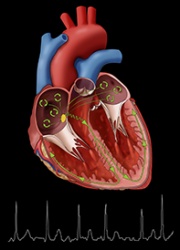 By Nicole MacKee
An eHealth-based screening program for atrial fibrillation (AF) in rural general practice may help to prevent up to 150 strokes a year, according to Australian researchers who say the strategy is also cost effective.

In a study published in the Journal of the American Heart Association, researchers recruited eight rural general practices and, between 2018 and 2019, screened more than 3000 patients (mean age 75 years) using a smart-phone ECG.

However, the researchers noted that half of the practices screened only 40 to 50% of eligible patients. They suggested that this may represent a ‘ceiling’ on the proportion of patients able to be screened in a general practice setting.

The researchers reported that the incremental cost-effectiveness ratio for population-based screening was $16,578 per quality adjusted life year gained and $84,383 per stroke prevented compared with no screening.

She said AF was underdiagnosed in the community and many strokes could be prevented with increased detection.

‘We now have better treatments with the nonvitamin K-dependent anticoagulants, but we still have to find those people who can benefit from this therapy,’ she said.

Associate Professor Webster said a key barrier to screening was the time pressures in primary care.

‘General practice is busy,’ she said. ‘We know that’s one reason why screening probably doesn’t happen.’

‘We tried to address some of those existing barriers and to facilitate task-shifting to the practice nurses,’ Associate Professor Webster said.