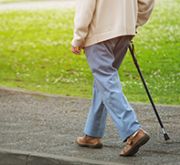 By Rebecca Jenkins
A dual decline in gait speed and cognition is associated with an increased risk of dementia, a cohort study of almost 17,000 adults finds, providing further evidence of the importance of adding serial gait speed measures to dementia risk screening assessments.

Drawing on data from the ASPREE trial of low-dose aspirin in thousands of healthy Australian and US adults aged 65 years and older, Monash University-led researchers set out to test the association between walking speed and four different measures of cognition with dementia risk.

Across the seven-year study, participants were regularly tested for global cognition, memory, processing speed and verbal fluency, as well as gait decline, which was defined as a decline in gait speed of 0.05 m/s or greater per year.

Researchers found a dual decline in gait and cognitive function – particularly memory decline – was significantly associated with an increased risk of dementia, when compared with no decline in either gait speed or in cognition.

‘These results highlight the importance of gait in dementia risk assessment and suggest that dual decline in gait speed and a memory measure may be the best combination to assess future dementia,’ they wrote in JAMA Network Open.

‘It was unclear whether this association was driven by a decline in one or more specific domains of cognitive function (such as memory, language and processing speed). Here, we showed that the risk of dementia was highest in the group with memory impairment, which is an early marker of Alzheimer’s disease.’

Current Australian guidelines do not include assessing gait speed when screening for dementia; however, gait is often used as a measure of frailty.

‘Measuring gait speed is straightforward and does not require special equipment or training. Including gait speed in the assessment of dementia risk, together with existing cognitive screening measures, could be a valuable approach to identify individuals at risk of Alzheimer’s disease,’ Professor Chong said.

Explaining the findings, Professor Chong said the combination of gait and cognitive impairment could be the result of coexisting pathologies affecting both functions – for example, vascular disease, or coexistent neurodegenerative conditions, such as Parkinson’s disease.

‘However, this study does not address whether a dual decline in gait and cognition is a cause or consequence of dementia pathology. This will be an important question for future research to address,’ he said.
JAMA Netw Open 2022; 5(5): e2214647.