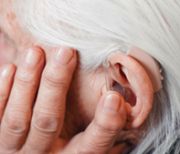 By Melanie Hinze
Hearing impairment may be linked to poorer physical function in older age, according to the results of a study published in JAMA Network Open.

Over time (two to three visits over a maximum follow up of 8.9 years), participants with hearing impairment also experienced faster declines in the short physical performance battery (SPPB). SPPB was a composite score of balance, gait speed and time to stand from a chair and sit back down five times with their arms folded.

Associate Professor Melville da Cruz, ENT surgeon and otolaryngologist at The University of Sydney and Westmead Hospital, Sydney, said the associations between hearing impairment and decline in many functional elements with ageing were being increasingly recognised through longitudinal population studies such as this one.

‘As hearing loss is under-recognised and undertreated in the community, opportunities to address hearing loss in middle life and thereby potentially improve the quality of life in later years exist,’ he said. ‘The GP has a central role in both the early identification of patients with hearing loss and encouraging them to seek treatments which address this aspect of their healthcare.’

The authors concluded that hearing impairment may be a future target for interventions designed to slow the decline of physical function associated with ageing.
JAMA Network Open 2021; 4: e2113742.doi:10.1001/jamanetworkopen.2021.13742.