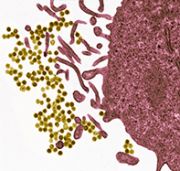 By Nicole MacKee
Glandular fever may increase the risk of depression in children and teenagers, Danish researchers have reported in Brain, Behavior, and Immunity.

In a prospective cohort study of almost 1.5 million people from the age of 10 years (born 1977 to 2005),12,510 people who had had hospital contact due to infectious mononucleosis were identified. Infectious mononucleosis, commonly known as glandular fever, is usually caused by Epstein­-Barr virus.

Over 29 years’ follow up, the researchers found that glandular fever was associated with a 40% increased risk of developing depression (hazard ratio, 1.40) compared with no exposure to the infection.

The increased risk emerged one year after infection and continued up to four years post glandular fever diagnosis.

‘This study shows that exposure to infectious diseases increases the risk of subsequent development of depression, and there are also studies showing it can be the other way around,’ she said.

She welcomed the Danish research, noting that it was the largest study to investigate this association. ‘This is a big, valuable study,’ she said.

The Danish researchers noted that the biological mechanisms underpinning the association remained unclear, but inflammation was the most likely ‘candidate’.

Associate Professor Schmaal added that indirect effects of infection may also contribute to the association.

‘Symptoms of fatigue or sleep problems, which may be a result of infection, can also lead to depression,’ she said, noting that understanding these pathways was crucial to enable prevention and treatment.

In the meantime, she said, it was important for clinicians to be on alert for inflammation and depressive symptoms.

‘We think that it might be important that clinicians test for inflammation in people with major depressive disorders, and also to be on alert for the development of depression in people who have had infectious diseases,’ she said.

Associate Professor Schmaal added that if any depressive symptoms were emerging, it was important to treat these early.