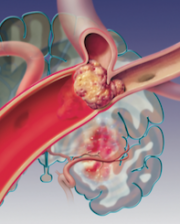 Long-term risk after stroke or TIA, even in stable patients

By Bianca Nogrady
Individuals who have experienced a stroke or transient ischaemic attack (TIA) are at significant risk of death, myocardial infarction (MI) or a repeat stroke as much as five years after the initial event, even if they are stable early on, according to new Canadian research.

Writing in the Canadian Medical Association Journal, researchers report on a five-year longitudinal case–control study in 26,366 individuals who experienced a stroke or TIA, and who did not experience a recurrent event, readmission, MI or death within 90 days. The primary outcome was a composite of death, hospital admission for recurrent stroke or MI, or admission to a long-term or continuing care facility.

Overall, by year five of the study more than one third (35.7%) of the group had died, been hospitalised for recurrent stroke or MI or been admitted to long-term or continuing care. The corresponding rate at one year was 9.5% and at three years 23.6%.

The rates of all adverse events were significantly higher in the patients who had had a stroke or TIA compared with matched controls.

‘Notably, long-term risks were highest for recurrent stroke and admission to an institution, whereas MI did not present a substantial long-term risk,’ the researchers wrote.

Commenting on the study, Dr Monique Kilkenny said the findings showed that even patients who were considered stable in the early days after a stroke or TIA had a significantly elevated long-term risk of adverse outcomes.

‘There’s been an understanding overall that these patients tend to have another event, but this is the first time I’ve seen it divided up, excluding those patients who have a repeat event within 90 days,’ said Dr Kilkenny, who is Senior Research Fellow with the Stroke and Ageing Research Group at School of Clinical Sciences at Monash Health and Monash University, Melbourne.

She told Medicine Today that the results highlighted the importance of secondary prevention in all patients who have experienced a stroke or TIA.

‘It is important to ensure that these patients are on antihypertensives and lipid lowering medications and ensure patients who have atrial fibrillation are on anticoagulants, and that we look at the lifestyle factors such as smoking and physical activity.’
CMAJ 2017; 189: E954-961; doi: 10.1503/cmaj.161142.