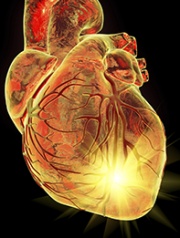 In an analysis of baseline data from the Mental Stress Ischaemia Mechanisms and Prognosis Study (MIPS), the researchers found that women experiencing MSIMI showed signs of greater peripheral vasoconstriction; whereas men with MSIMI experienced increased haemodynamic workload. The analysis was published in the American Heart Association journal, Arteriosclerosis, Thrombosis and Vascular Biology.

The MIPS study included 678 patients with coronary artery disease who were exposed to stress in the form of public speaking. The participants underwent myocardial perfusion imaging before and after speaking, and cardiovascular mechanisms were assessed using rate-pressure product response (peak heart rate x peak systolic blood pressure as a measure of myocardial work) and peripheral arterial tonometry (as a measure of peripheral blood flow determined by resistance vessels).

Professor David Hare, Professorial Fellow at the University of Melbourne and Senior Cardiologist at Austin Health, said the cardiovascular impact of acute stress had been shown in previous research, most notably in a study that uncovered an association between emotional stress and cardiovascular events during the FIFA World Cup in Germany in 2006 (N Engl J Med 2008; 358: 475-483).

Professor Hare added that Takotsubo cardiomyopathy – where an episode of acute stress, such as a bushfire, results in impaired myocardial contractility from an outpouring of catecholamines – had also been well described in the literature.

However, he said, the notion of distinct, gender-based cardiovascular mechanisms in MSIMI was new.

Professor Hare said that handling stress was obviously important for both men and women who had myocardial ischaemia that was precipitated by specific psychosocial situations. Interventions such as cognitive behavioural therapy had been shown to be of some benefit, he said.

‘The key finding of this study should probably be for clinicians to think differently about the medical management of stress on the heart,’ said Professor Hare, who is also Director of Research in the Department of Cardiology and Director of Heart Failure Services at Austin Health.

‘In a male, you would clearly work harder at reducing the amount of work the heart is doing. For instance, you might give a beta blocker because it will be more effective in reducing the rate-pressure product,’ Professor Hare said. ‘But, contrary to that, a beta blocker could potentially make peripheral vasoconstriction worse, because most beta blockers have beta-1 effects in the absence of vasodilatation. So a beta blocker for MSIMI in women might potentially make stress-induced ischaemia worse. You would therefore be more likely to use a vasodilator, such as a calcium channel blocker, rather than use a beta blocker in women.’
Arterioscler Thromb Vasc Biol 2018; 38: 00-00, doi 10.1161/ATVBAHA.117.309535.