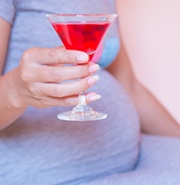 No safe limit for alcohol during pregnancy, Australian study suggests

By Jane Lewis
An Australian study examining the association between the facial features of babies and prenatal alcohol exposure has suggested that even low levels of alcohol consumption can influence craniofacial development of the fetus.

The study’s findings ‘support the conclusion that for women who are or may become pregnant, avoiding alcohol is the safest option,’ the study authors stated.

‘The study demonstrates that even low levels of alcohol exposure cause craniofacial changes. Should we worry about this? The answer is “yes,” because the brain develops at the same time as the face, and from similar embryological origins. So the implication is that if the face is subtly abnormal, then in all probability, the brain may be too,’ he told Medicine Today.

Published in JAMA Pediatrics, and led by researchers at the Murdoch Children’s Research Institute in Melbourne, the prospective cohort study measured anatomical differences in craniofacial shape of children with varying levels of prenatal alcohol exposure, and children born to women who abstained from alcohol during pregnancy. Among 415 children (mean age, 363 days), a consistent association was observed between craniofacial shape and prenatal alcohol exposure at almost any level, regardless of when during pregnancy the exposure occurred.

‘Alcohol exposure operates on a continuum, with the higher dose or frequency leading to worse outcomes,’ commented Dr Shelton. ‘But even at low levels, there is likely to be a negative outcome, and that matches with my clinical experience. The findings of this study reinforce the message that no level of alcohol during pregnancy is safe.’

The authors of an accompanying editorial noted several strengths of the study, and said it highlighted the potential of facial imaging for improving and simplifying the diagnosis of fetal alcohol spectrum disorder. However, because of the unproven clinical significance of its findings, ‘caution against the temptation to extrapolate these findings broadly’ is warranted.
JAMA Pediatr 2017; doi:10.1001/jamapediatrics.2017.0778.
JAMA Pediatr 2017; doi:10.1001/jamapediatrics.2017.1342.