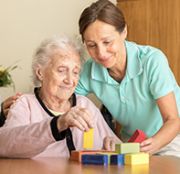 By Dr Emily Lathlean MB BS, FRACGP
A systematic review and network meta-analysis (NMA) has found nondrug interventions to be more efficacious than drug interventions in reducing symptoms of depression in patients with dementia without a major depressive disorder (MDD).

Of 256 eligible randomised controlled trials, Canadian researchers selected 213, which assessed interventions for depression in 25,177 people with dementia without a diagnosis of a MDD, for pairwise meta-analysis and NMA.

No drug intervention alone was found to be more efficacious than usual care.

‘Depressive symptoms are very common in dementia and thus this study has great clinical relevance and importance in guiding treatment,’ he said.

University of Melbourne CR Roper Senior Research Fellow Dr Amit Lampit, an expert in meta­-analysis, said he had little concerns about the design, conduct and results from a methodological point of view. However, he noted the absence of league tables comparing the interventions head-to-head, as well as with different types of control.

Dr Chong speculated that the heterogeneity of treatments and control conditions (i.e. ‘usual care’ or placebo) made it difficult to do head-to­-head comparisons.

‘Our findings suggest a high probability that people with dementia will derive a clinically meaningful benefit from nondrug interventions’, the researchers wrote, which they said carried additional benefits of improved social engagement in the community and reduced harm associated with antidepressant use (e.g. from falls and fractures).

The researchers advocated that everyone, including people with dementia, caregivers, clinicians and policy makers, had a role in translating their finding into practice.
BMJ 2021; 372: n532 http://dx.doi.org/10.1136/bmj.n532.