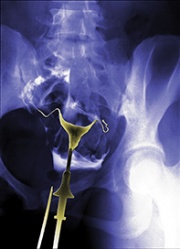 By Bianca Nogrady
Using oil-based contrast in hysterosalpingography may be associated with higher pregnancy rates than using water-based contrast, according to a widely-reported study. However, an expert has noted that ultrasound is often the preferred option for investigating possible fallopian tube and uterine problems in women with infertility.

The study, published in the New England Journal of Medicine, was a randomised multicentre trial involving 1119 women who had been trying unsuccessfully to conceive for at least one year and who had an indication for evaluation of tubal patency using hysterosalpingography. Exclusion criteria included known endocrine disorders, fewer than eight menstrual cycles a year and a high risk of tubal disease – for example, women with known endometriosis.

The rate of ongoing pregnancy (>12 weeks’ gestation) in the oil contrast group was 39.7%, compared with 29.1% in the water contrast group, representing a significantly higher rate (37%) after the oil-based hysterosalpingography.

The greatest increases in pregnancy outcomes were in women who still required some sort of infertility treatment after the hysterosalpingography.

Commenting on the study, Dr Joseph Sgroi, obstetrician, gynaecologist and fertility specialist with Melbourne IVF and Epworth Freemasons said it was already known that tubal flushing of any kind – whether for hysterosalpingography, ultrasound or done laparoscopically – was associated with an increased chance of pregnancy. However, he told Medicine Today there wasn’t any clear evidence in favour of hysterosalpingography over other methods of investigating tubal patency.

‘As gynaecologists, we tend to like to investigate with ultrasounds scan rather than hysterosalpingography because there is a lot of additional useful information that is obtained, such as ovarian pathology – cysts or endometriomas – the structure of the uterus and presence of fibroids or evidence of endometriosis,’ said Dr Sgroi.
N Engl J Med 2017; doi: 10.1056/NEJMoa1612337.