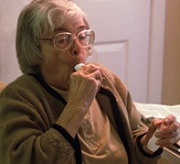 By Bianca Nogrady
Older patients with asthma are more likely to experience treatment failure than younger patients, a study has found.

Analysis of data from 10 US trials involving 1200 patients with asthma showed that those aged 30 years or older had an 82% greater incidence of treatment failure than those younger than 30 years. The risk of treatment failure increased 2% for every year above the age of 30, according to the study published in the American Journal of Respiratory and Critical Care Medicine.

This increased risk was even greater for patients using inhaled corticosteroids (ICS), and in older patients with lower lung function, longer duration of asthma or earlier onset of disease. However, the study did not find that gender had any overall impact on response to asthma therapy.

Commenting on the study, respiratory physician Dr Simon Bowler from Mater Hospital Brisbane said there was evidence that older patients tended to have more difficult to treat asthma, which demon­strated that asthma was not a homogeneous condition. Dr Bowler suggested that as eosinophilic asthma tends to respond well to ICS, the finding of an increased risk of treatment failure with ICS in older patients may reflect a predominance of noneosino­philic – or neutrophilic – asthma in these patients, possibly due to age­-related airway changes.

‘Interestingly, if you were on a long-­acting beta agonist and ICS you did better, and the trend of increasing treatment failure with age did not emerge,’ said Dr Bowler, who is also Chair of the Medical Advisory Committee for Asthma Australia.

‘That might tell us that long­ acting beta­-agonists may be effective for people who have noneosinophilic asthma,’ Dr Bowler told Medicine Today. He said the findings should also reassure doctors that the use of long­-acting beta­-agonists in conjunction with ICS did not appear to be associated with an increased risk of treatment failure, despite recent black box warnings placed on such products in the USA.