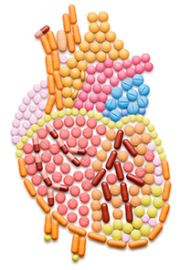 Professor Terry Campbell, cardiologist at St Vincent’s Hospital and Emeritus Professor of Medicine at UNSW Sydney, said the studies, both published in The Lancet, were very good studies and were ‘reinforcing rather than game­-changing’. ‘They flow logically from earlier work on polypills and on multiple treatments for risk.

They also flow logically from the trend over the last 20 years or so to treat absolute risk rather than individual risk factors,’ said Professor Campbell. ‘The trials show that reducing risk factors reduces risk. The more risk factors you reduce, whether they’re high or not to start with, the more you’ll reduce the absolute cardiovascular risk of the patient.’

A multicentre, randomised, double­-blind phase 3 trial conducted by Australian researchers followed 591 adults with hypertension who were initially untreated or receiving monotherapy, and reviewed outcomes 12 and 52 weeks after commencement of either the quadpill (containing quarter­-doses of irbesartan, amlodipine, indapamide and bisoprolol) or a monotherapy control (irbesartan 150 mg). By 12 weeks, 40% of participants in the control group, versus 15% in the intervention group, had required additional blood pressure medications. At 12 and 52 weeks, blood pressure control rates were higher in the intervention group than the control group.

‘It’s really making the point that a low dose of four drugs is better than a quadruple dose of one, and that would probably be true for whichever of those you chose as your one (and they chose irbesartan),’ Professor Campbell said, noting the study found benefits ‘both in terms of side effects but also in terms of efficacy.’

The types of polypills used in these studies are not currently available in Australia.

‘Apart from the double and triple combination therapies for hypertension, the other sorts of polypills that include antihypertensives, statins and aspirin are not readily available at the moment,’ Professor Campbell said, although he noted that plans for more combination pills were already underway.