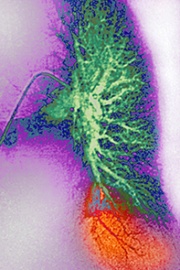 Postoperative pulmonary embolism: how long does its risk persist?

By Nicole MacKee
Pulmonary embolism (PE) risk may remain elevated for at least 12 weeks after surgery, according to French research that has found increased risk even after minor procedures.

In a case-crossover study of more than 60,000 patients (aged 45 to 64 years), published in JAMA Surgery, researchers found that the postoperative risk of PE was increased for at least 12 weeks for six types of surgery (vascular surgery, gynaecological surgery, gastrointestinal surgery, hip or knee replacement, fractures and other orthopaedic operations).

‘A minor procedure like gastrointestinal tract biopsy accounted for 399 cases [in the French study], and this is a procedure where a patient goes home the next day,’ he said. ‘So that concerns me.’

Although Associate Professor Tran said the study was ‘fantastic’ methodologically, one limitation was its reporting of odds ratios.

‘If a relatively well person is having surgery, the absolute risk of venous thromboembolism (VTE) is approximately 1%. Giving that person antithrombotic treatment will reduce that risk even further, but you may get more bleeding,’ he said. ‘So, there is a trade-off there and we need to be careful.’

Associate Professor Tran added that the research evaluated only the risk associated with the procedure, and it was important to also account for individual patient factors when assessing VTE risk.

This risk is also dynamic, he said. ‘When a patient comes into hospital, they may be low risk for the first few days, but if their situation changes – perhaps they need a different procedure – they need to have their VTE risk reassessed because their risk may change over time.’

Associate Professor Tran said the study reinforced the need for Australia to develop new clinical guidelines for the prevention of VTE. The previous guidelines were rescinded in 2016. Last year, the Australian Commission on Safety and Quality in Health Care launched the VTE prevention clinical care standard.
JAMA Surg 2019; doi:10.1001/jamasurg.2019.3742.