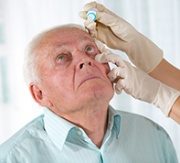 By Nicole MacKee
Ophthalmic symptoms are common, but often overlooked, in people with Parkinson’s disease, according to researchers who say a questionnaire can assist in the timely detection and treatment of such symptoms.

In an observational study published in Neurology, researchers reported that 82% of those with Parkinson’s disease had one or more ophthalmic symptoms, compared with 48% of controls.

The researchers said the VIPD­Q could improve detection and treatment of these symptoms.

Dr Ana-­Raquel Marques, visiting researcher at the Parkinson’s disease research clinic, Brain and Mind Centre, University of Sydney, said although many studies had shown that a broad spectrum of ocular disorders (affecting the eyes or eyelids) and visual disorders (including central visual perception) were common in Parkinson’s disease, these remained largely overlooked both in research and clinical practice.

‘Given the large range of symptoms in Parkinson’s disease, patients usually don’t report these oculovisual symptoms, and neurologists may overlook them. Thus, the existence of tools such as the VIPD­Q would be very useful in clinical practice, to ensure screening these visual problems, and treating them when necessary,’ she said.

Dr Marques, who is also a neurologist at Clermont­ Ferrand University Hospital, Parkinson Expert Centre, France, said impaired vision could worsen many of the symptoms observed in Parkinson’s disease.

‘We know that gait disorders and postural instability, but also attention disorders or visual hallucinations, are major problems for these patients, and that these symptoms are usually not improved – and sometimes even worsened – by dopaminergic treatment,’ Dr Marques said.

‘Since visual impairments are treatable most of the time, it is very likely that increasing the screening and treatment of visual disorders in [patients with] Parkinson’s disease would lead to direct improve­ment of their condition, particularly for symptoms such as gait disorders and postural instability that are usually not improved with medical treatment.’ However, she said, further longitudinal studies were needed.
Neurology 2020; 94: 1-9. doi:10.1212/WNL.0000000000009214.