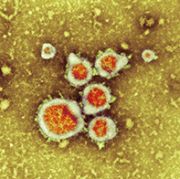 By Nicole MacKee
Clinicians should ‘expect the unexpected’ in terms of respiratory viral presentations in the coming months, a leading expert has warned, as COVID­-19 lockdowns and restrictions continue to alter usual transmission patterns of non­-COVID respiratory viruses.

Professor Ian Barr, Deputy Director of the WHO Collaborating Centre for Reference and Research on Influenza, said unseasonal spikes in respiratory syncytial virus (RSV) last summer was an early example of an unseasonal outbreak. More recently, he said, parainfluenza and human metapneumovirus, which were absent in 2020, had also strongly rebounded in WA and NSW. ‘And presumably in other states as well,’ he said, noting a lack of data from other states and territories.

Professor Barr was commenting on WA research, published recently in Archives of Disease in Childhood, outlining the unseasonal spike in RSV that resulted in significantly increased hospitalisations among infants and toddlers in the state.

RSV­-positive admissions peaked in WA in early summer 2020, after an absence of infections through the usual winter risk period due to SARS­-CoV­-2­-related public health measures.

Seventy­-five percent of the RSV cases in 2020 occurred in December (327 admissions), and this peak was 2.5 times the previous year’s July peak (123 admissions).

‘The lockdowns, restrictions, school closures and other measures to try to mitigate COVID have had a differential effect on different respiratory viruses,’ Professor Barr said.

‘For example, influenza has been just about knocked on the head, with virtually no influenza circulating since April 2020; in contrast, several other respiratory viruses have re-emerged, generally on the back of some mild relaxation on restrictions from COVID, and RSV is an example of that.’

He said the summertime re-emergence of RSV occurred in ‘quite a dramatic fashion’ at an unexpected time. ‘You could normally set your watch on peaks of RSV in Australia in the temperate regions being from June, July, August period.’

Professor Barr is also a coauthor on research currently under consideration at Nature Communications that showed a significant reduction in RSV genetic diversity following COVID­-19. Genetic sequencing showed two genetically distinct RSV­-A (subtype) clades were responsible for the outbreaks, highlighting the importance of continued surveillance of this and other respiratory viruses.

He warned clinicians to ‘expect the unexpected’ in viral outbreaks in the coming months. ‘We are in these unusual circumstances with lockdowns and restrictions, but these [viruses] are not gone forever,’ Professor Barr said. ‘They might be gone for a period of time, but they are always out there ready to come back.’
Arch Dis Child 2021; doi:10.1136/archdischild-2021-322507.