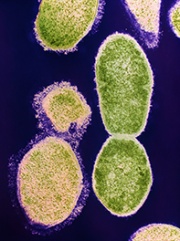 By Nicole MacKee
Influenza and Streptococcus pneumoniae infections have been pinpointed as key respiratory triggers for acute myocardial infarction (AMI) and stroke in new UK research.

Writing in the European Respiratory Journal, researchers reported substantial increases in a first AMI or stroke in the week after laboratory-confirmed influenza and S. pneumoniae infection. For AMI, the age- and season-adjusted incidence rate (IR) for days 1 to 3 after S. pneumoniae infection was 5.98 (95% confidence interval [CI], 2.47-14.4) and after influenza 9.80 (95% CI, 2.7-40.5).

They also found a higher incidence of postinfection AMI and stroke in participants aged under 65 years compared with older participants, which might reflect higher rates of vaccination in the older cohort, they said.

Professor Raina MacIntyre, Professor of Infectious Disease Epidemiology at UNSW Sydney, said more awareness of the relationship between infections and chronic diseases was needed. ‘This study identified two infections, influenza and pneumococcus, as significantly associated with heart attack and strokes,’ she told Medicine Today. ‘Both these infections are preventable by vaccines.’

Professor MacIntyre, who was lead author on 2016 research suggesting that influenza vaccine should be included in coronary heart disease prevention strategies, said vaccination should be viewed in the same way as statin use, smoking cessation and blood pressure control (Heart 2016; 102: 1953-1956).

‘We accept these as essential prevention strategies, and there needs to be more awareness of the role of vaccines in preventing heart attack and stroke. There is less evidence about pneumococcal vaccine, but this study adds to a small number of studies that also suggest pneumococcal vaccination prevents cardiovascular disease.’
Eur Respir J 2018; 51: 1701794.