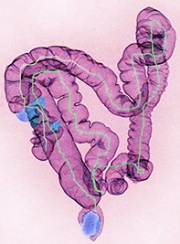 By Nicole MacKee
Taking aspirin daily for around two years can reduce colorectal cancer (CRC) risk in people with Lynch syndrome for the following 20 years, according to findings described by an Australian expert as ‘extraordinary’.

Professor Finlay Macrae, Head of Colorectal Medicine and Genetics at The Royal Melbourne Hospital and research coauthor, said a 20­ year follow up of the Cancer Prevention Program 2 (CAPP2) study, published in The Lancet, found that aspirin had a prolonged benefit for people with Lynch syndrome.

People with Lynch syndrome have a germline mutation in one of the DNA mismatch repair genes, predisposing them to colorectal and other cancers.

‘We knew aspirin worked to reduce the risk of CRC from the previous publication in 2011, but the duration of the benefit found here is really quite extraordinary,’ Professor Macrae told Medicine Today.

‘Exposure to aspirin, 20 years ago, for an average of 2.5 years – with some going up to five years – maintains a reduction of incidence of bowel cancer in people with Lynch syndrome on all forms of analysis.’

In the double-blind, randomised CAPP2 trial, 861 patients with Lynch syndrome (with an average age of 42 years) from 43 centres around the world, including Australia, were randomly assigned to receive 600 mg aspirin daily or placebo.

Participants were followed up for at least 10 years, and for up to 20 years in England, Wales and Finland.

An intention­-to­-treat analysis showed that aspirin protected against CRC (hazard ratio, 0.65), and in those people who took aspirin for the planned two­-year period, a similar protective effect was found (HR, 0.56).

The protective benefits of aspirin did not become apparent until 4.6 years after starting aspirin, a previous analysis had shown.

‘The dose needed could well be less than 600 mg from an analysis of multiple studies,’ he said. ‘Australia is contributing now to the CaPP3 study, testing
100 mg versus 300 mg versus 600 mg in Lynch syndrome.’

He said Australia led the world in its recommendation that all Australians aged 50 to 70 years check with their GP about taking 100 to 300 mg aspirin daily to prevent CRC.

‘We are the only country in the world who have stepped out that far with the recommendation,’ said Professor Macrae, adding that aspirin was not recommended for patients aged 70 years and older due to the negative findings of the Aspirin in Reducing Events in the Elderly (ASPREE) trial. Contraindications to aspirin in other age groups would also need to be considered.

Professor Macrae said the sustained benefit shown in this latest analysis meant that people could cease taking aspirin at age 70 years and enjoy benefit until they were 90 years of age.
Lancet 2020; 395: 1855-1863.