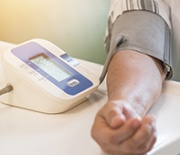 By Melanie Hinze
New research supports taking blood pressure (BP) in both arms as a key part of cardiovascular (CV) risk assessments within primary care and other low-resource settings.

Published in Hypertension, the meta-analysis combined data from 53,827 individuals, from 24 studies, to create one international dataset.

Included studies were observational longitudinal or randomised controlled trials without BP lowering interventions. Participants were aged 18 years or older, and were recruited from community, primary care or general clinic settings. The results were based on a single pair of measurements, taken on one arm followed by the other arm.

Professor Markus Schlaich, Dobney Chair in Clinical Research at the Dobney Hypertension Centre, Royal Perth Hospital, Perth, and President of the High Blood Pressure Research Council of Australia (HBPRCA), said that the relevance of IAD had long been acknowledged. However, that this study, for the first time, had collated a very large dataset to demonstrate an association between IAD and outcomes, further supported the general recommendation that medical practitioners should be measuring BP on both arms, at least when seeing a patient for the first time. Furthermore, the authors provided a threshold of IAD to be considered abnormal (>10 mmHg), which Professor Schlaich said would be of clinical use.

‘If you have a significant BP difference between two arms, then sometimes there can be anatomical issues, such as a narrowing of a subclavian artery, which would have therapeutic implications,’ he said.

Professor Schlaich explained that in his practice, taking BP on both arms at the first visit is routine. ‘Essentially, it is a rather simple approach to get a better idea about the cardiovascular risk of a patient,’ he said. ‘It doesn’t cost much, the patient is there anyway and it’s not invasive’.

‘As per current guidelines, future BP measurements should be taken at the arm with the higher BP,’ he added.

‘So, taking blood pressure on both arms, ideally at the same time, but if not feasible sequentially, will be of benefit in the management of these patients.’
Hypertension 2021; 77: 650-661.