Split, atrophic nails with a pterygium 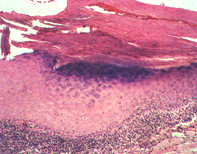 Figure 2. Biopsy of the nail bed showing a prominent lymphocytic infiltrate producing an increased blue granular zone in the epidermis and a thick keratin layer representing the dystrophic nail.

A 58-year-old woman presented with a three-year history of progressive thinning and longitudinal splitting of her fingernails. Her thumbs were also partially covered by a web of tissue (pterygium) which extended from the proximal nail fold across the nail bed (Figure 1).

The main elements seen on clinical examination of this woman&#39;s nails were atrophy, longitudinal ridges, distal splitting, lamellar peeling, pterygium formation and a violaceous discolouration of the proximal nail fold and nail beds.

Lichen planus of the nails is characterised by atrophic nail plates associated with a violaceous discolouration of the proximal nail folds.

Associate Professor Kossard is Director of Dermatopathology at the Skin & Cancer Foundation Australia, Darlinghurst, Sydney, NSW.
This article was first published in Modern Medicine of Australia in October 1997. It was reviewed and updated in July 2011.