An elderly woman with a hand rash and chest wall lesion

An elderly woman with a hand rash and chest wall lesion

A 96-year-old left-handed woman presents with a three-day history of an intensely painful vesicular rash of the left hand (Figures 1a and b). She also has an isolated chest wall pustule with an erythematous base (Figure 2).

The hand rash extends to the radiocarpal joint and includes both dorsal and volar aspects. Some of the vesicles have coalesced, and there is a haemorrhagic plaque on the palm. Crusting is noted on the dorsal aspect. There are no left hand nail changes noted at assessment and the right hand is unaffected.

The chest wall lesion is noted on the patient’s left anterior chest wall over the fifth rib area. The erythematous lesion appeared at a similar time to the hand changes and is painful to light touch.

The patient has previously suffered from hand dermatitis, and she has gout (controlled with allopurinol). Four weeks previously, she had a skin biopsy from the dorsum of the affected hand (for a suspected, and later confirmed, actinic keratosis). At presentation, there was an incidental finding of a markedly elevated white cell count with a predominance of lymphocytes. The patient was subsequently referred to haematology outpatients and diagnosed with chronic lymphocytic leukaemia (CLL).

The patient has had no recent medication changes and no newly introduced soaps or detergents. She does not have any signs of oral or mucosal changes. There is no associated itch, lymphadenopathy, arthritis, cough, diarrhoea or signs of systemic compromise on general examination.

Herpes zoster is extremely painful because it involves the reactivation of viral replication within sensory ganglia. Treatment therefore centres around antiviral therapy and analgesia. The goals of treatment are to expedite healing of the vesicles and to decrease the duration and intensity of the acute neuritis. An example of a recommended regimen may be oral valaciclovir (1000 mg three times daily for seven days), paracetamol (1 g four times daily) and ibuprofen (400 mg three times daily), with stronger opioids such as oxycodone to be added if required.2 Oral famciclovir is an equally effective and cheap alternative to valaciclovir. Oral aciclovir is less convenient as it requires more frequent dosing.

There is strong evidence that antiviral therapy reduces the duration and intensity of acute neuritis.3-5 When started within 72 hours of the onset of herpes zoster there is a likely benefit of reduced overall intensity of pain.6 Starting antiviral treatment after the initial 72 hours is recommended if new lesions are still emerging, as this would suggest ongoing viral replication.7 However, our case patient is immunocompromised due to CLL, and therefore treatment should be started regardless of time of onset because there is a significant risk of disseminated infection that can lead to sequelae such as hepatitis or encephalitis. In this instance, hospital admission for intravenous aciclovir would be appropriate.

Ongoing pain at the site of cutaneous eruption is very common long after the rash disappears. Postherpetic neuralgia is defined as pain that persists for longer than four months after the onset of the initial rash.8 Gabapentin, pregabalin and tricyclic antidepressants are currently first-line treatments.9-11 Caution is required when using tricyclic antidepressants in elderly patients because of anticholinergic effects.

This case demonstrates the importance of shingles vaccination in the elderly and in immunocompromised patients. The Australian Government currently recommends and funds the vaccine through the National Immunisation Program for adults at 70 years of age, with a catch-up program available for those aged 71 to 79 years until 31 October 2021 (https://beta.health.gov.au/services/shingles-herpes-zoster-immunisation-service).

The authors acknowledge the assistance of Dr Mark Aldred in preparation of the manuscript.

Figures 1a and b. The hand rash at presentation (case patient). Crusting and vesicles on the dorsal aspect (a, top), with vesicles and a haemorrhagic plaque on the palm (b, above). 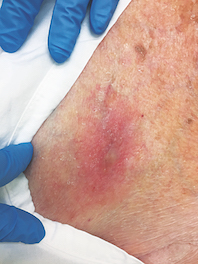 Varicella – more than just a rash
An elderly woman with a hand rash and chest wall lesion
Herpes zoster: improving protection in older people
Herpes zoster vaccines: the new and the old
A teenager with an ear rash and facial weakness

Bullae in an older man after a fall
A rapidly progressing, blistering eruption in a febrile patient
A sudden outbreak of facial papules and pustules
Recurrent painful intertriginous nodules
Therapies for psoriasis. Beyond lesion control